On the 9th April a small black cat followed my sister home from the bus stop, and decided to camp outside our house for the following few days. Eventually, this little stray cat became my little Pepper and I thought it’d be nice to write a post about how he came to be my cat! (This post might be a bit long….sorry!) 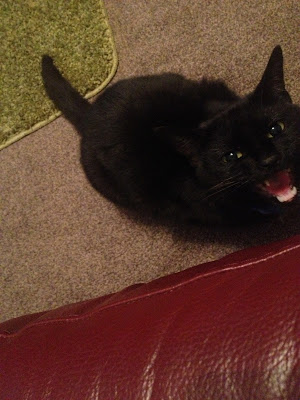 After realising the cat had been sleeping in our garden and not actually going to a home, I messaged the local cat and dog shelter asking for advice. (If you’re looking at adopting a cat or dog, or just want to help this great cause you can check out Millstream Animal Centre here). I’d already checked for a name tag and there was none, so the very helpful lady that I spoke to told me to check local shops for missing posters – there were none, so I then uploaded a picture to their Facebook site. It received so many comments and shares in such a short space of time we were sure we’d find the owner. Soon, there was a comment from a lady saying she was sure it was her cat, so I gave her my number and she text me. After a few texts checking details like the little bell on the collar, the eye colour, the hair, everything, she spoke to her husband and he confirmed that their cat had arrived safe at home. So the little stray still didn’t have an owner!

After a couple of days staying outside our house, we set up a little bed in our porch and covered the floor with newspaper and let it sleep in it. We tried multiple times to get the cat into a cage kindly donated by our neighbour to get it to the vets, and on around the 4th day, we eventually did! Once we got it to the vets we found out that he was a boy (thank god we gave him a gender mutual name!), around 2 years old, healthy and chipped. The chip told us he was actually called Bud, but all of us except my Dad preferred Pepper. It was 3-1 so I guess you know who won. The vets receptionist gave the number a ring, but it was dead. She told us she would send them a letter but that the cat was from a different part of Manchester so we couldn’t work out how he had got down here. She also said we would probably end up keeping him, as she sees this a lot and it is usually the case that his owners had moved house and left the cat behind, this made me so sad and angry!

We looked after Pepper as our own; fed him, watered him, changed his flea collar to a newer one, bought him toys and treats, he really became part of the family! Even though we cared about him a lot, we knew there was a possibility that his owner would get in touch and he would have to go home. It was a sad thought but we would always have given him back, I couldn’t bare the thought of keeping someone’s cat away from them!

On Friday the 26th, I got a call from the vets saying that she’d had no phone call or reply to the letter, and as all protocol had been followed, we get to keep him! I was so happy! After always wanting a cat, I finally had one and he has definitely settled into the family perfectly. On Monday I’m ringing the vets to set up an appointment to get his booster injections and make sure everything is as it should be.

It seems as if my years as a cat lady have began, and I’m sure you’ll be seeing a lot more of Pepper around my blog from now on 🙂 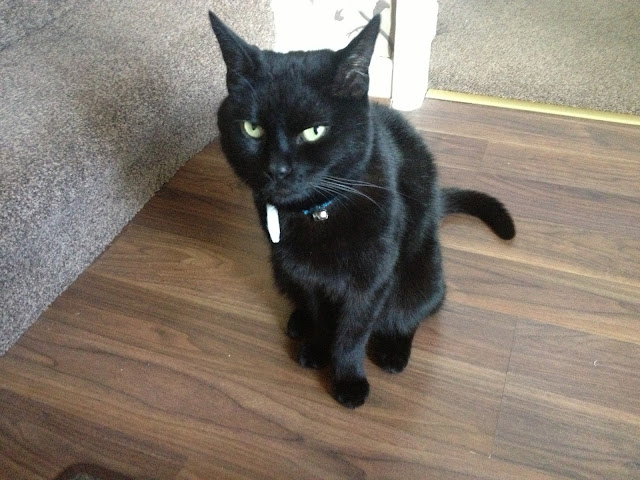