I was expecting big things from this book after I’d seen so many people reading it. Unfortunately, I was quite disappointed. I started reading the book a few months ago, and I couldn’t get into it at all, but after hearing such good things I decided to push on in the hope that it might get better. 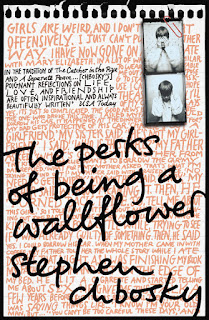 The story revolves around a fifteen year old boy called Charlie, who feels as though he never really fits in and is quite socially awkward. After making a somewhat strange group of friends, Charlie finds himself still feeling as though he is on the outside of the group and still over analyses everything which ends up making him paranoid. Despite this, Charlie is quite a likable character; he’s modest and quite shy.

Charlie is the main character in the book, and it’s all written in first person by himself. The book is written as a series of letters that are all addressed to an unknown character. I found this quite interesting, and was constantly questioning and wondering as to who the letters are being sent to, or if they are being sent at all. I do think that the characters were quite interesting as well, which was the best thing about the book in my opinion.

Personally, I didn’t enjoy the book which was massively disappointing as I usually really enjoy books similar to this one. I have to admit, I didn’t actually finish the book; after nearly 3/4 of not enjoying it, I didn’t see the point in finishing it. I didn’t know whether to write this post, as I hadn’t read the whole of the book so didn’t know whether that was fair. Although, it is a book review and I can’t enjoy every single book I’ve read and think it’s always better to be honest!

I decided to watch the film after trying to read the book and found myself disappointed at that too! It wasn’t a bad film by any stretch of the imagination, but after it ended I didn’t feel like it had been an amazing watch. I was so disappointed as the trailer had looked so good *sad face*. What did you think about the book everyone? Do you think I should try and read it again in the future? Thank you for reading 🙂