I fear that this will be a post full of nonsense while I fangirl my butt off, but I will try my best to make this resemble a logical review. The majority of my review will be non-spoiler, but I do want to throw in a couple of my favourite quotes from the book so I’ll give you a heads up before I get to those in case you don’t want to read them! This was also the first book that I “tabbed” using different coloured arrow post its to help with my review and to mark my favourite parts (there’s a hell of a lot of tabs). I received Caraval by Stephanie Garber in the January FairyLoot box (check out what else was inside here). I had actually pre-ordered the book months ago as it was one of my most anticipated releases for 2017, so when I managed to get my hands on it a couple of days earlier than the publication date through FairyLoot I was SO excited. 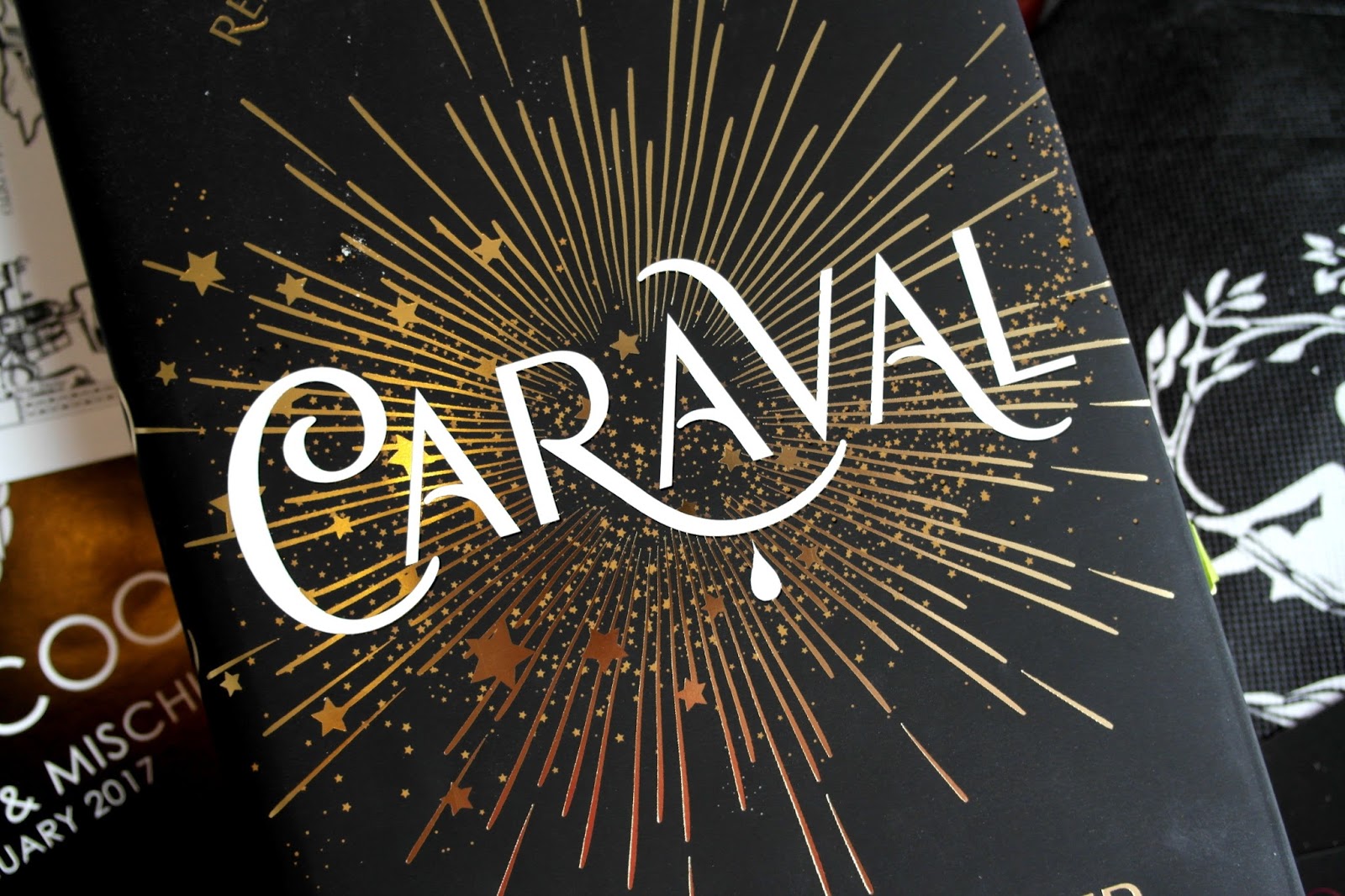 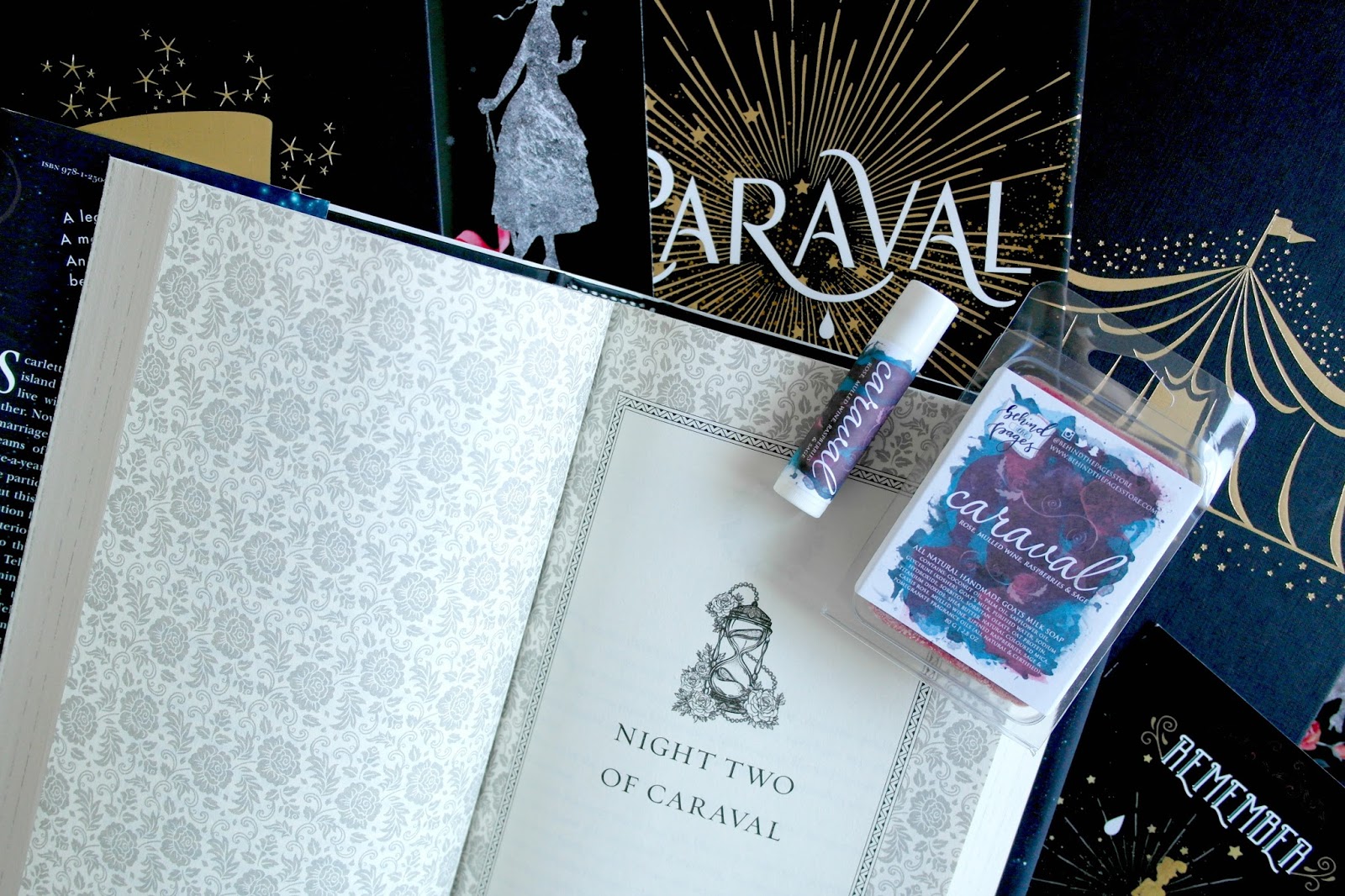 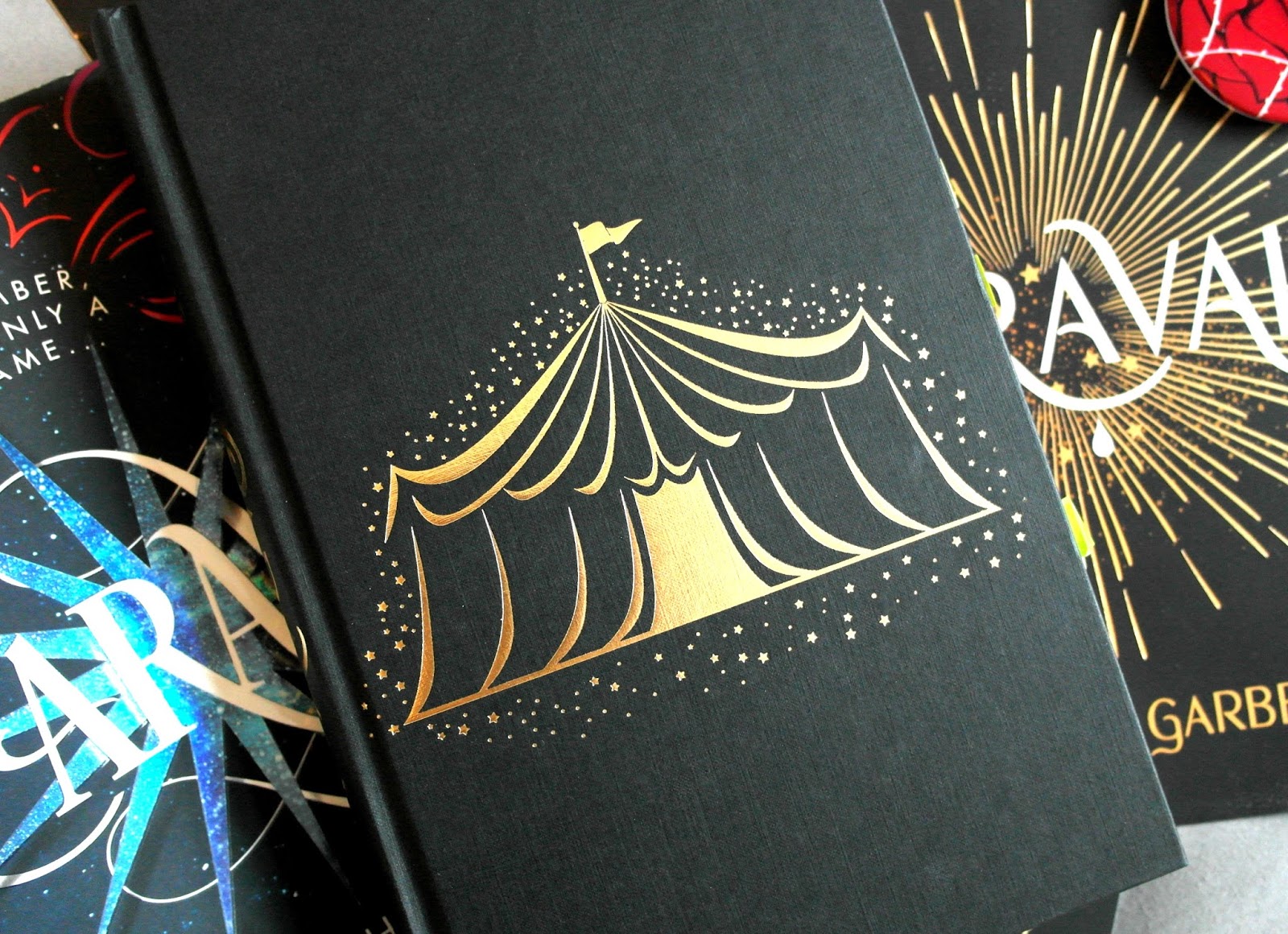 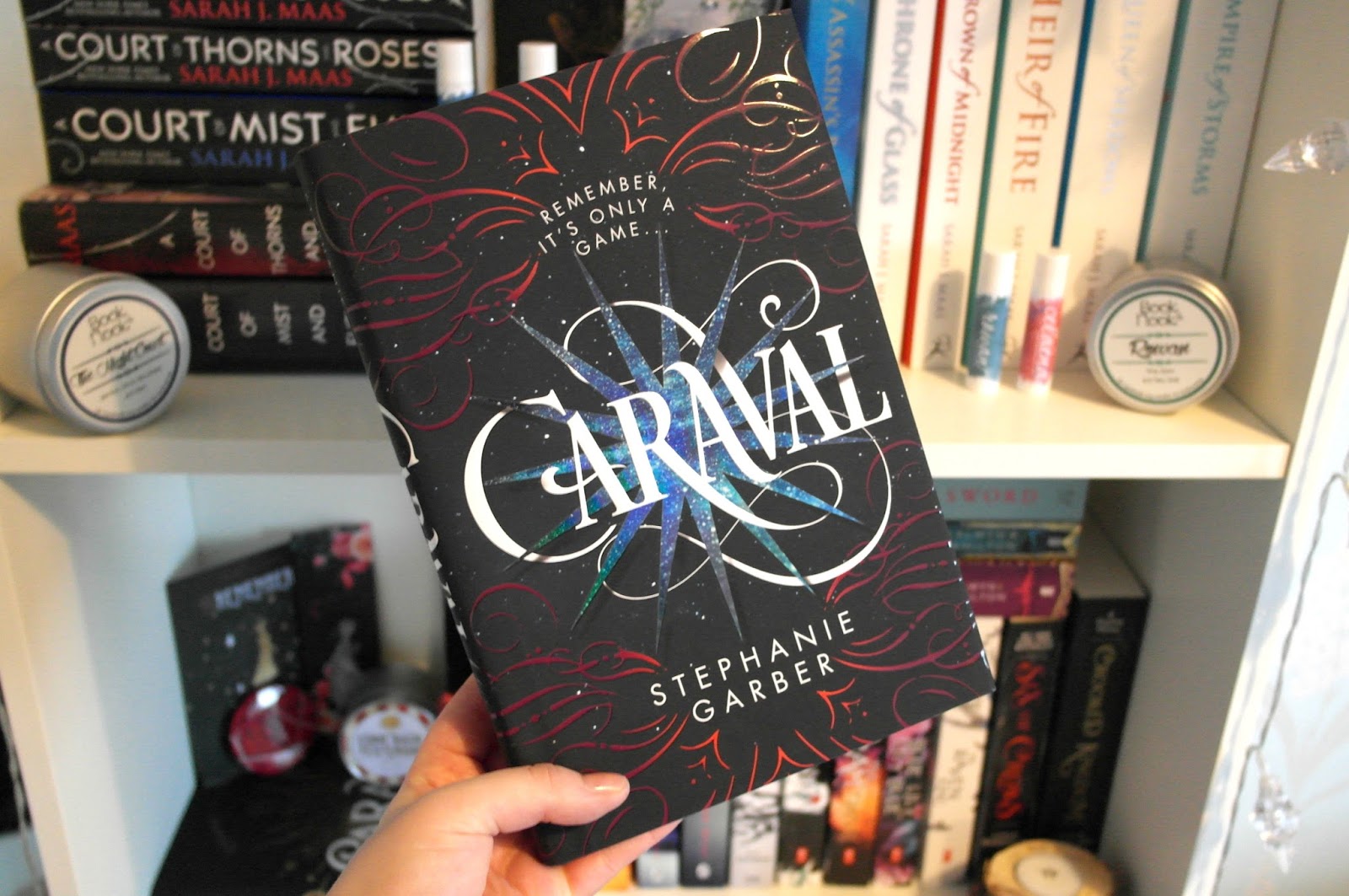 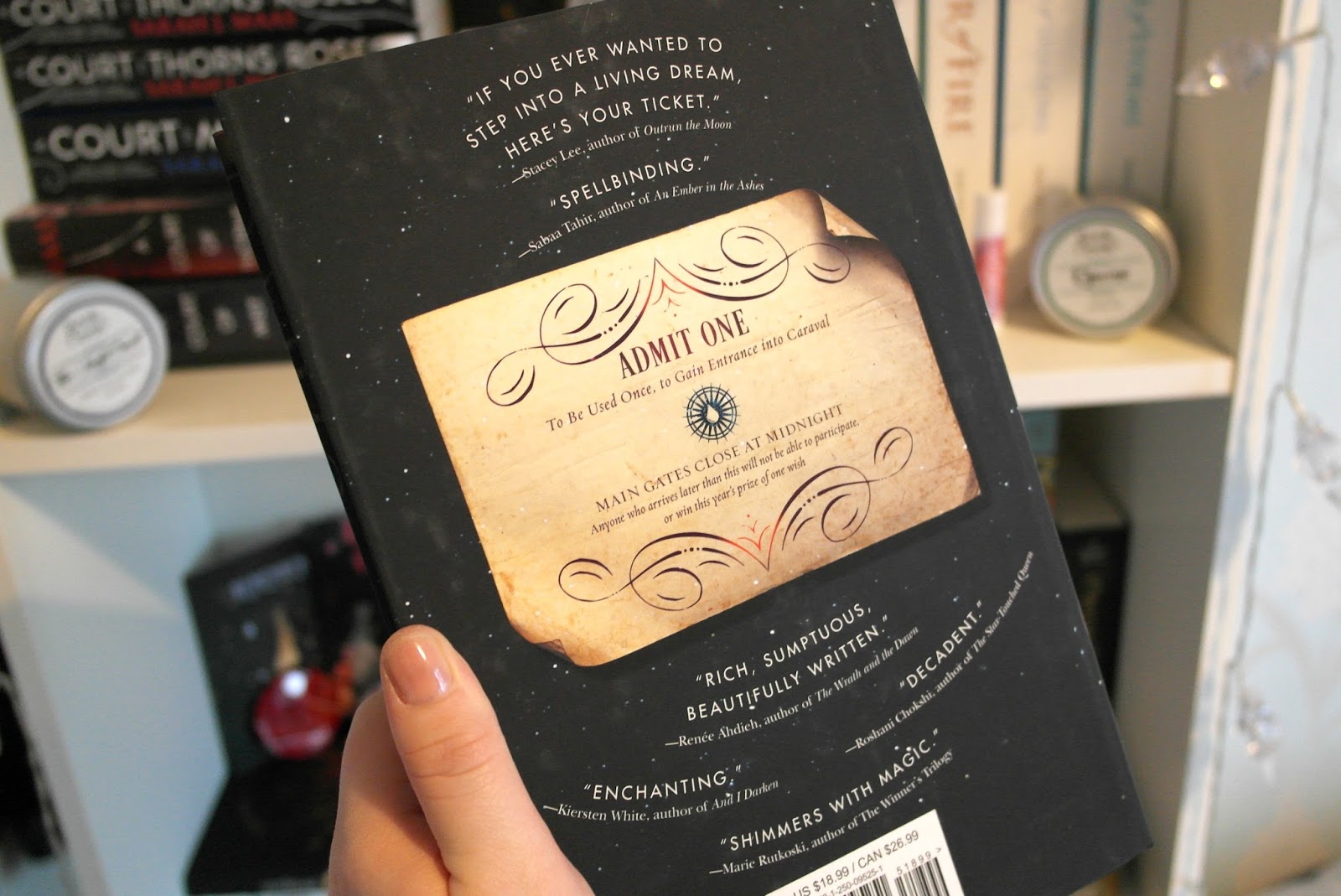 “Scarlett has never left the tiny island where she and her beloved sister, Tella, live with their powerful, and cruel, father. Now Scarlett’s father has arranged a marriage for her, and Scarlett thinks her dreams of seeing Caraval, the far-away, once-a-year performance where the audience participates in the show, are over.

But this year, Scarlett’s long-dreamt of invitation finally arrives. With the help of a mysterious sailor, Tella whisks Scarlett away to the show. Only, as soon as they arrive, Tella is kidnapped by Caraval’s mastermind organizer, Legend. It turns out that this season’s Caraval revolves around Tella, and whoever finds her first is the winner.

Scarlett has been told that everything that happens during Caraval is only an elaborate performance. But she nevertheless becomes enmeshed in a game of love, heartbreak, and magic with the other players in the game. And whether Caraval is real or not, she must find Tella before the five nights of the game are over, a dangerous domino effect of consequences is set off, and her sister disappears forever.”

I have to start by mentioning the absolutely stunning covers. The dust jacket is simply beautiful, but there are four variations of the actual hardback: a tent, a rose, a dress and a clock. I received the tent and I’m in love with it! I did a bit of digging online and came across the US hardback and well, I could hardly resist could I (the last two pictures). And now I hear that a special edition is being released in Tesco and I’m going to have to buy that too! (Update: I bought it).

I read 10% on the day I received the book but sadly had to put it down to get on with some uni work *booo*. So. yesterday (when writing this) I made sure that I put some time aside to settle down with the book and dive back in. I’d planned to have an early night and catch up on some sleep, I could fit in a few chapters of Caraval right? Wrong. I could fit in the entire rest of the book. I absolutely could not put this book down. At one point, I declared (internally) that it was time for bed. So I got ready, set my alarms, got under the covers ready to get some sleep… and picked Caraval up again. There was no way I could sleep until I finished the book.


Possibly my absolute favourite things about this book are the world building and descriptions – they’re frickin’ amazing. I was enthralled from the first couple of pages, it is full of absolutely stunning sentences. In fact, while Face-timing my boyfriend I actually made him shut up for a minute so that I could read a few out to him and his response was “you look very happy with that” and I was. So happy. I felt like I was experiencing Caraval right along with Scarlett – I could feel the mystery and magic of it as if it were pouring off the page. The writing was absolutely stunning and I could visualise each and every scene as if I were standing right there. There was just so magic and fantasy in Caraval, from the ever changing dress, to portals, to the time moving quicker there than anywhere else, they all worked together to create a perfectly bewitching environment.

I fell in love with (most of) the characters too. The bond between the sisters in Caraval was so strong and clear, it was as if their love for each other was tangible. Their father however, I did not like. Without spoiling anything, the fact his gloves are described as “plum coloured… the shade of dark bruises and power” should say more than enough. I really appreciated that each character was different, they were individuals with their own mind and really helped to propel the story forward as opposed to being a “side character” just for the sake of it. I could feel Scarlett’s frustration through the whole book which only added to the intensity and urgency of the plot. I also found the fact that Scarlett has synesthesia really interesting; she sees emotions and thoughts in colour and it’s something I haven’t read about before!

I’m pretty sure I fell in love with Julian from the first scene (sidenote: Stephanie actually said in an interview that she never really intended to keep him in the story after the first chapter or so which makes him all the more intriguing)! Also, Caraval included one of my all time favourite YA tropes, even if just for a short while: the fake husband and wife scenario with lots of playful flirting. Yesss.

Throughout the story there were tonnes of character development which I really enjoyed, but was this just to help “the game”? I loved that  as the story went on, Scarlett decided to do what is right for her and not just what is right for everyone else, but I was constantly changing my mind on the other characters. Were they genuine? Were they real? What is going on!?


I truly felt as though no one and nothing could be trusted. The cover says “Remember, it’s only a game”, and it definitely lived up to that. My mind raced from one possibility to another, while my eyes frantically took in each word as I flipped through the pages. I had a constant feelings of unease, dread and nervousness but I was thoroughly excited too – I guess this is how the real players felt! My heart broke over and over, I actually found myself saying “oh my god” several times, particularly in the last 1/4 of the book but I loved every part of it. I’m quite content with the ending and how it was (or wasn’t) wrapped up, though I’m pretty sure there is a sequel and I need it now!

I actually have the opportunity to meet Stephanie at an upcoming event at my local Waterstones and I’m so excited! Caraval was a magical, stunning and thoroughly enjoyable read that twisted, turned and shocked at every opportunity. I truly loved it, so I gave it a well deserved 5/5 stars – I’d give more if I could! Keep reading for some awesome quotes…

Some of my favourite quotes:

“Lovely seeing you Scarlett.” Julian smiled, as cool and seductive as a slice of shade in the Hot Season – One of Julian’s first lines

The hazy glow of a lantern caught the metallic edges of the paper, making them blaze a shimmery gold, the colour of magic and wishes and promises of things to come – The invitation to Caraval

Glittering mist swirled around vibrant green mountains – all covered in trees – that rose toward the sky as if they were massive emeralds. From the top of the largest peak an iridescent blue waterfall streamed down like melted peacock feathers, disappearing into the ring of sunrise-tinted clouds that pirouetted around the surreal isle – Isla de los Suenos

The sky was black, the moon visiting some other part of the world, as Scarlett took her first step into Caraval. Only a few rebel stars held posts above, watching as she and Julian crossed the threshold of the wrought-iron gate, into a realm that for some would only ever exist in wild stories – The first step into Caraval

She remembered her first impression of him, tall, roughly handsome, and dangerous, like poison dressed up in an attractive bottle – Scarlett thinks of Julian

“Crimson,” Julian murmured as his eyes flickered back open. Light brown, the colour of caramel and liquid amber lust


There are so many more awesome quotes and lines throughout the rest of the book, but I don’t want to include anything from the last half of the book because – spoilers!


*Book depository affiliate links used. I get a small commission if you purchase through them, and you get free delivery!