This month I finished my undergraduate degree after three years in university and a 12 month placement. Before I could finish though, I had to hand in my last assignments and sit my final exam. So you wouldn’t blame me for thinking that I wouldn’t get much reading done. Well, 12 books later and it seems that I’ve proved myself wrong! 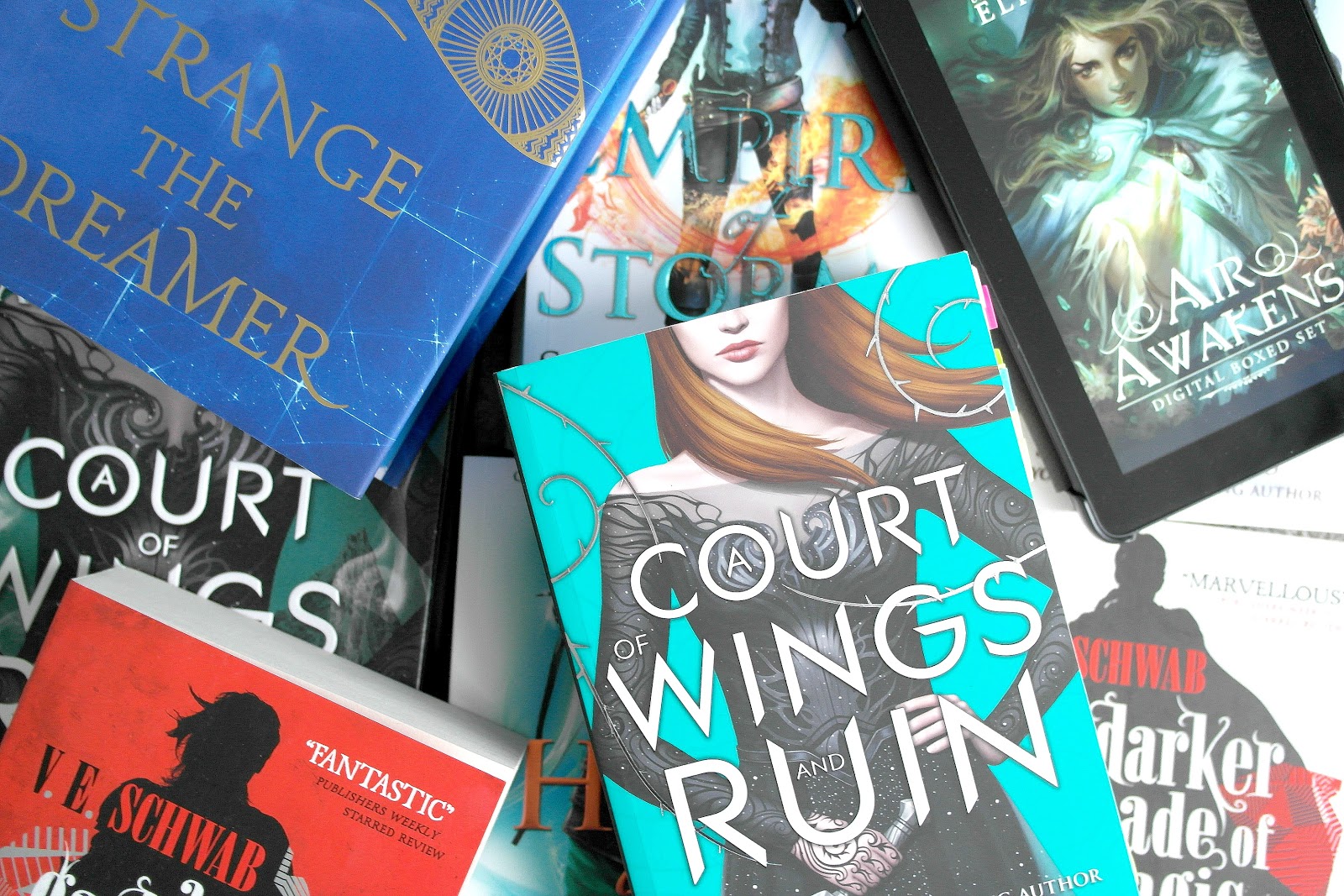 The first book that I read in May (only just, I finished it on the 1st!) is Strange the Dreamer by Laini Taylor. I had the pleasure of attending a book signing at Waterstones Liverpool in March where I had my copy of Strange signed, along with the Daughter of Smoke and Bone series which you can read about here, and it made me so excited to read the book. Laini has such a beautiful way of writing. I can’t quite explain what she does to make it so magical but I was totally swept away from the first page. Though it did take me a while to get through the first few chapters due to my internal “I should be working and revising” struggle, I flew through the last half in one night. I was totally invested in the characters and the world and was whisked through a whole host of emotions. Strange the Dreamer is an utterly stunning book, both inside and out, about dreams, gods and libraries, with brave, loyal and loving main characters. It was the perfect way to start such a good reading month. 4/5 stars.

So it’s probably not a surprise to those of you know that know me or follow me on social media that on the 2nd of May I both received and read a certain book. Yup, you guessed it, my second read in the month of May was my most highly anticipated book of the year, A Court of Wings and Ruin by Sarah J. Maas. Now, there is no way I can get all of my feelings and thoughts across in this wrap up without making it 24394857394873976 words long. What I will say is that from the moment it arrived I stopped reading it once, to make some lunch, which I ate gingerly whilst still reading hoping that I didn’t get anything on the book, which wouldn’t surprise me if I’m honest.

Anyway, it took me eight and a half hours to read and throughout that time, I laughed, cried, shouted, sobbed my heart out, gasped, felt sick and by the end my heart was so full of emotion that I just had to sit and contemplate my thoughts for about half an hour. Now I know that some people had problems with the story but I loved it, wholeheartedly. I think SJM did an amazing job at wrapping up Feyre and Rhys’ arc whilst leaving enough open for the next set of books. While I am absolutely heartbroken that this part of the story is over, I’ll always be incredibly grateful to SJM for writing such an incredible series that has not only changed my life and helped me to meet so many other amazing people who love ACOTAR as much as me, but fuelled my love for fantasy once again. I’m currently re-reading ACOWAR with lots of tabs and notes so that I can soon my write my full spoilery review, so keep an eye out for that! Undoubtedly 5/5 stars. Always.

After devouring ACOWAR, I had a taste for SJM’s writing and decided to re-read the last three books in the Throne of Glass series: Heir of Fire, Queen of Shadows and Empire of Storms. While ACOTAR is my all time favourite series, Throne of Glass is a very close second. I love that our heroine is sassy, can kick some serious arse, isn’t afraid to just do what she wants to do, but will do anything for those she loves despite having been dealt a seriously shitty hand. Not only is the series packed with action, the best kind of romance and some amazing characters, it’s also full of twists and turns that will literally have you on the edge of your seat. Empire of Storms breaks my heart every single goddamn time. 5/5 stars.

I’m so glad to have had the chance to read this next book ahead of it’s release, thanks to the publishers and NetGalley! I’d been seeing it all over Twitter and Bookstagram and knew that I had to read it. In When Dimple Met Rishi, Dimple, an aspiring web developer, gets the chance to attend a highly commended web development summer program. Unbeknown to Dimple, her parents agreed to send her there to find the “Ideal Indian Husband”. Rishi on the other hand is a hopeless romantic, and jumps at the opportunity to attend the same program with hopes of wooing Dimple and falling in love. However, from the moment they meet and Rishi greets Dimple with “Hello future wife” to which Dimple responds to by throwing coffee all over him, their relationship was not what either of them expected.

I loved that Dimple really stood up for what she believed in and while Rishi loves the idea of finding his soulmate and falling in love, once he realises that Dimple desires different things, he puts his feelings aside and respects her wishes. I would have liked to have read more about the actual coding and web development that happened across the program however, I appreciate the story was more about the character development which I totally respect, and this hasn’t changed my opinion of the book at all. When Dimple Met Rishi is the perfect own voices YA contemporary. It was funny, it was cute, it gave me “bookish butterflies” and I loved the main characters. I felt that I learned a lot about Indian culture whilst reading, and really enjoyed seeing lines in Hindi as well as English!  Diversity in books matters and I’m so glad to have heard from so many people that When Dimple Met Rishi is good representation and totally relatable! 4/5 stars.

So I’m a little embarrassed about how long it took me to start the next series I read in May. I’d owned the books for a few months but I’d been seeing them around the bookish community for so much longer. I finally started the Darker Shades of Magic by V.E. Schwab trilogy in May! I read the first two books, A Darker Shade of Magic and A Gathering of Shadows and was instantly swept away into a world of magic, pirates and royal intrigue unlike anything I’ve read before. While I raced through the stories and absolutely loved the characters, I think this was one of those series that is loved by so many and has received so many amazing reviews, that I went in with my expectations set way too high which could realistically never be met. Nonetheless, I am so excited to finish the trilogy with A Conjuring of Light and to see what happens next (though I’ve read that a lot of people were heartbroken so I’m also a bit scared) and the first two books are a definite 4/5 stars from me!

I came across the next series that I started reading in May over on Facebook. I’m a member of a couple of ACOTAR/TOG groups (cause you know… I just can’t get enough) and a few other members had recommended Air Awakens by Elise Kova. I downloaded the first book onto my Kindle a while back as it was on offer, but only decided to read it this weekend. And well the rest, as they say, is history. I devoured the first book on Saturday, and as of the 30th May, I had finished the fourth. Air Awakens features elemental magic, a hate to love forbidden romance, a training school, war, politics, a corrupt royal family, side characters that make your heart melt and ‘on the edge of your seat’ action. What more could you want? Whilst the writing isn’t technically the best I have ever read, I’m absolutely enthralled by the characters and the story, and for the first time in a long time, I have a real longing for the fictional world and spend my time counting down to when I can dive right back in. I gave Air Awakens and Fire Falling 5/5 stars, and Earth’s End and Water’s Wrath 4/5 stars.