I can’t believe that we’re already half way the year already! I know it’s such a cliche to say, but this year really has gone so quickly, and so much has changed already. So far this year, I’ve finished my four year degree at university, I’ve received my results (I got a First!), I have a new car, I’m looking for my first permanent full time role in Marketing and PR and I’m graduating later this month! Between all this, making the first six months of the year even more awesome, I’ve read some pretty good books too.

Choosing my favourite books of 2017 so far has proven to be a little tricky. I loved a lot of books, so I’ve had to rein myself in. I’ve decided to only talk about 4.5 and 5 star reads, otherwise this post would go on and on and on and… you get the idea. 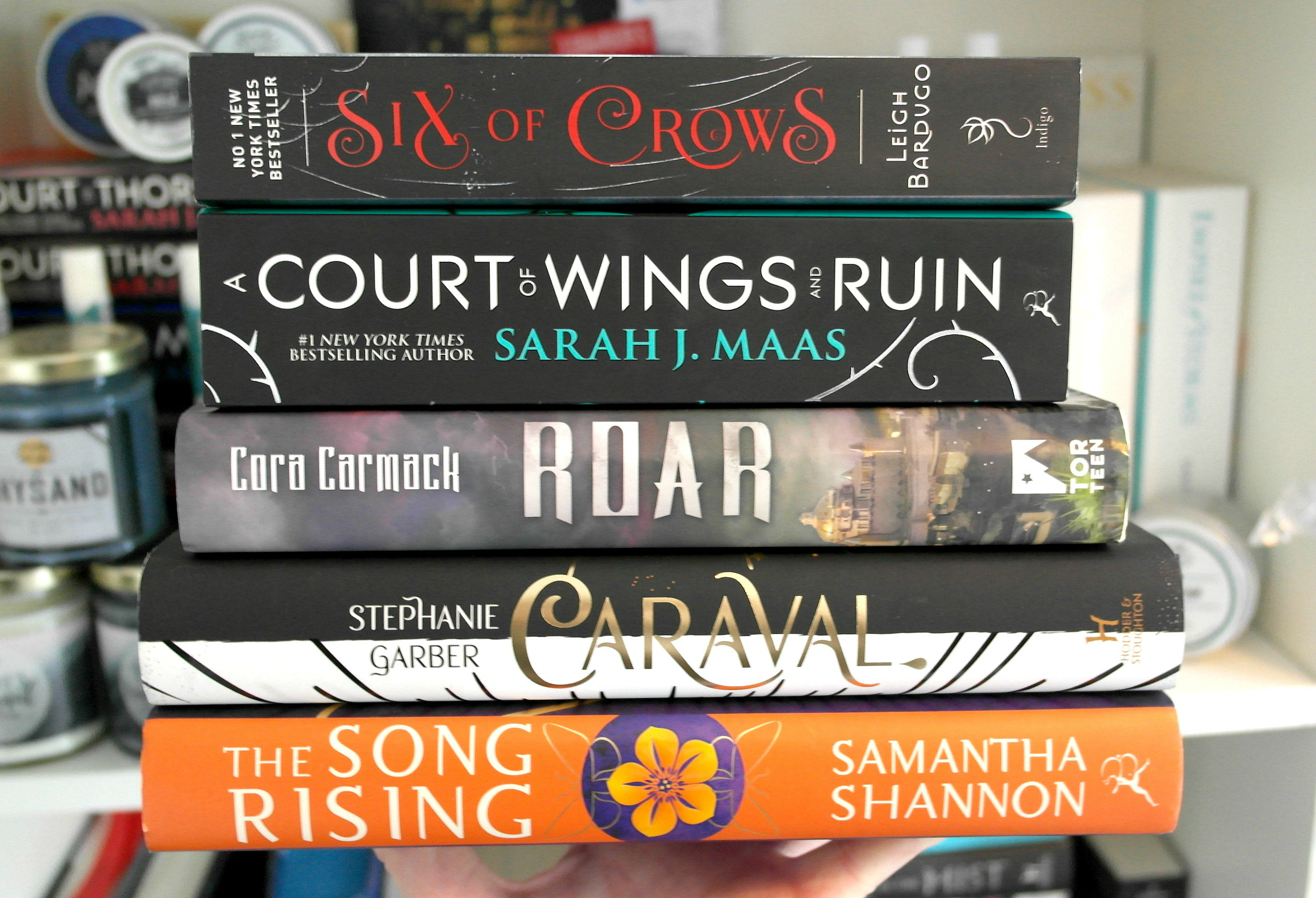 My first 4.5 star read of 2017 was Caraval by Stephanie Garber. I received it back in January in a FairyLoot box. I read it in pretty much one sitting because boy, was I hooked. It’s full of enthralling descriptions, fantastical world building, strong character development, twists and turns a fair bit of swooning on my part at the romance. You can read my full review here.

It took a while for me to find my next 4.5 star read, it was only June in fact. Roar, the first in the Stormheart series, by Cora Carmack. A fantastic read full of elemental magic, storms, adventure, personal growth and romance. I raced through it and couldn’t put it down! I’ll be posting a full review very soon so keep an eye out.

My final 4.5 star read, read only this month, is Six of Crows by Leigh Bardugo. I know, I know, it’s taken me so long to read it, but I’m so glad I finally did. I enjoyed this book cover to cover, with fast paced action, deep and complex characters whom I grew way too attached to and a clever and cunning plot (thanks to Kaz’s slightly crazy, sometimes selfish but utterly brilliant plans). I’m always a sucker for romance too, and whilst that definitely wasn’t the focus of this story, I felt like just the right amount was included.

My first five star read of 2017 was The Song Rising by Samantha Shannon. The Bone Season and the Mime Order, the first two books in the series, were amazing but The Song Rising certainly stepped it up a gear. This book was so incredibly good that I just couldn’t help but devour it page by page. It brought out so many different emotions and feelings: excitement, worry, panic, sadness, happiness, warmth and tension to name but a few. Once again, this was a really well thought out plot, with superb writing skills and excellent world building from Samantha Shannon. I was actually lucky enough to meet Samantha and get all of my books signed which was so exciting!

To those of you who know me, or even just follow me on social media, it’s no surprise that another of my five star reads of 2017 was A Court of Wings and Ruin by Sarah J. Maas. Oh My. GOSH. I don’t think I could ever put into words how much this series means to me, and this book didn’t disappoint. Whilst I know that some fans had some issues, which I can totally understand, I think ACOWAR was a perfect conclusion to Feyre and Rhys’ arc. I read the book in one day, in exactly eight and a half hours actually, and throughout it I cried, laughed, sobbed, shouted and just generally couldn’t deal with it. Once I finished the book, I seriously just sat and contemplated my thoughts for a while. Undoubtedly 5/5 stars. Always.

My final five star reads of the last six months are Air Awakens and Fire Falling by Elise Kova.  I downloaded the first book in the Air Awakens series one Saturday, and devoured it in one sitting. A couple of days later, I’d finished the fourth. The Air Awakens series elemental magic, a hate to love forbidden romance, a training school, war and heart melting side characters; I was completely enthralled from beginning to end. What more could you want?

Ruin and Rising by Leigh Bardugo / Frostblood by Elly Blake / Rebel of the Sands by Alwyn Hamilton / Wintersong by S. Jae Jones / Daughter of Smoke and Bone by Laini Taylor / The Bone Season and The Mime Order by Samantha Shannon / When Dimple Met Rishi by Sandhya Menon / A Darker Shade of Magic and A Gathering of Shadows by V.E. Schwab / Earth’s End and Water’s Wrath by Elise Kova / The Last Piece of my Heart by Paige Toon

What are your favourite reads so far? I’m so excited for all the books I’m yet to read in 2017, and to see what this list looks like in December!