Back in January, I was lucky enough to be part of the blog tour for Elly Blake’s debut novel, Frostblood. I devoured the book in just a few days and gave it well deserved 4.5/5 stars, and so its sequel Fireblood crept its way to the top of my most anticipated releases for 2017. Just like her first story, I raced through this one, totally enthralled from beginning to end. My review is spoiler free for Fireblood, but be careful if you haven’t read Frostblood yet! 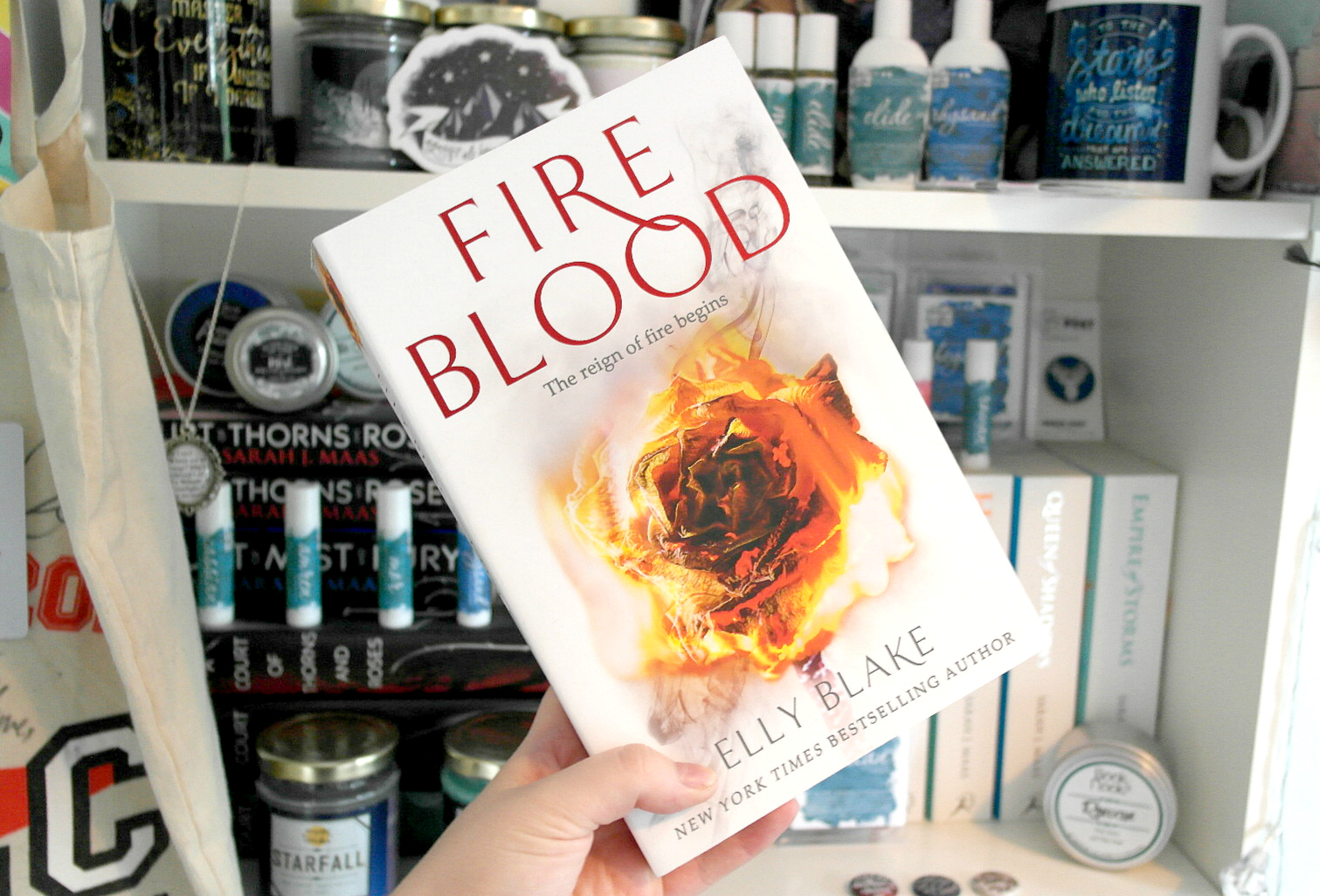 From the (beautiful) cover:

Against all odds, Ruby has defeated the villainous Frost King and melted his throne of ice. But the bloodthirsty Minax that was trapped inside is now haunting her kingdom and everyone she loves. The answers to its demise may lie to the south in Sudesia, the land of the Firebloods, and a country that holds the secrets to Ruby’s powers and past….

Despite warnings from her beloved Arcus, Ruby accompanies a roguish Fireblood named Kai to Sudesia, where she must master her control of fire in a series of trials to gain the trust of the suspicious Fireblood queen. Only then can she hope to access the knowledge that could defeat the rampaging Minax–which grows closer every moment. But as sparks fly in her moments alone with Kai, how can Ruby decide whom to trust? The fate of both kingdoms is now in her hands.

Right from the beginning I felt attached to Ruby. As a Fireblood in the Frost Kingdom, she feels like she doesn’t belong and was subject to a lot of hostility that really made me feel for her. After going through some difficult situations, I admired her strength and courage and enjoyed the development of Ruby and her journey, especially seeing her in her true homeland.

With the story being set in Sudesia for the most part, we didn’t see too much of Arcus but I am still a huge fan, though I do wish he and Ruby would just OPEN UP to another. Don’t worry though, there were definitely some swoon worthy interactions between the two of them. Arcus is loyal, trustworthy, caring despite his cool (haha) exterior and loving; a true YA hero.

We were introduced to some new characters through the journey to Sudesia, her mother’s homeland and the land of Firebloods, including some lovable crew members, a pickpocket and of course the Queen, her Prince and the Fireblood Court.

So, the one we were all wondering about… Kai. After reading the summary, I wasn’t sure how I would feel about Kai or how he would add to the plot, because I ship Ruby and Arcus hard and worried that it would be some kind of typical love triangle. However, I can now confess, I love Kai. Yes he was flirty and funny, but also a good friend and I definitely became invested in his character too. Ruby had spent so long without interacting with any other Firebloods, and growing up in a land ruled by the Frost King, that someone like Kai was exactly who she needed. He helped her not only develop her powers, but understand them too, and made her feel as though she was finally “home”. They weren’t always 100% with each other but overall but in the end I loved their relationship. No spoilers as to the outcome of the love triangle though!

Blake weaved in important plot points from her first book into Fireblood effortlessly throughout the beginning, recapping small bits of information that were important to her sequel without info-dumping, which I really appreciated.  The world building was much stronger in Fireblood I felt; we were exposed to new lands and places like Sudesia, and more characters which really helped to give us an idea of the scope of the world. Blake’s descriptive writing was impeccable too, with scenes to easy to picture it felt as though they were jumping off the page.

One of the things I loved about Fireblood is the fact that it is action packed from the very beginning. Whilst Frostblood was character driven in my opinion, Fireblood’s plot was much more fast paced with lots going on throughout. There were also several revelations in the story, with some parts feeling tense and uneasy which really added another layer. The development of the Minax plot point was really interesting and definitely more intense this time around, especially with the addition of another major evil character!

A lot of the plot revolves around a quest that Ruby undertakes to become a valued member of Fireblood society – I won’t say exactly what because of spoilers, but this quest includes a series of trials. I was hoping that the trials would be a little harder and darker personally, but that’s just me and I enjoyed them all the same. They helped Ruby to develop and strengthen her powers, and I really liked the direction that the plot went in; the learning student arc is one of my favourites.

I raced through Fireblood in just two days, and my only complaint is that I wish it were longer. Fireblood definitely did not suffer from second book syndrome purely acting as a bridge to the third book. It was a fast paced and action packed story, filled with kick-ass characters and a gripping plot. I can’t wait to see where the third book, Nightblood, takes us. Another 4/5 stars from me!