A few months ago I heard about Zoella’s latest bookclub collection with WHSmith, and one of those books was Moxie by Jennifer Mathieu. I’d seen the book buzzing around on social media quite a bit, and I just knew I had to read it. While it has only been released today, the store was selling it early because of the collection. So of course, I had to pick up a copy straight away.

During my weekend at YALC back in July, Moxie’s publishers Hodder Children’s ran an activity where you could get your hands on an ARC of Moxie. All you had to do was find the girl with the Moxie badges and declare “I am a Moxie Girl!” Naturally, we spent a good 15 minutes walking laps until we found her. We even picked up some awesome badges which are currently decorating my denim jacket! 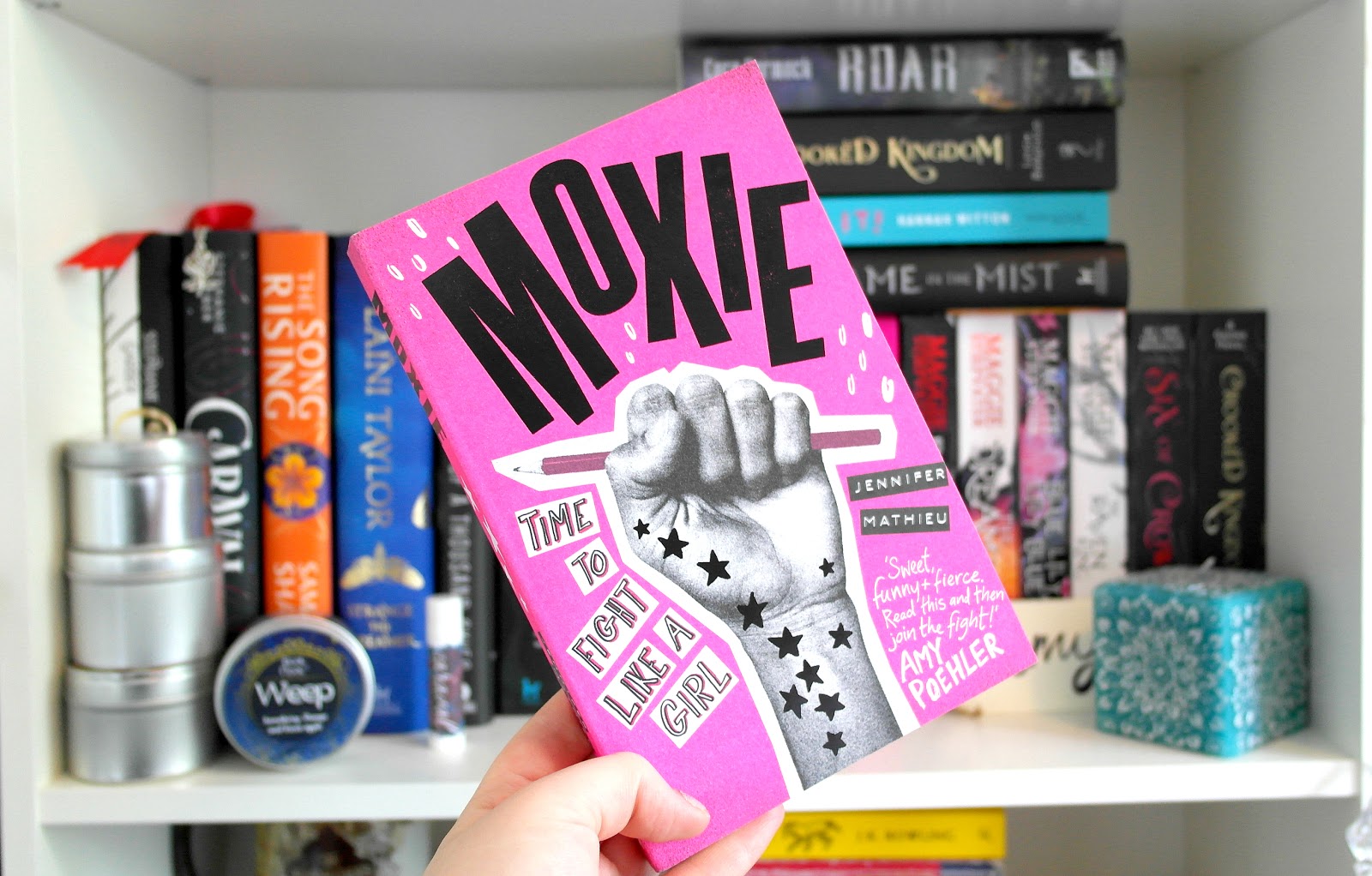 Viv’s mum was a tough-as-nails, punk rock Riot Grrrl in the ’90s, and now Viv takes a page from her mother’s past and creates Moxie, a feminist zine that she distributes anonymously to her classmates. She’s just blowing off steam, but other girls respond and spread the Moxie message. As Viv forges friendships with other young women across the divides of cliques and popularity rankings, she realises that what she has started is nothing short of a girl revolution.

I was sucked into the plot straight away. The story opens with Vivian in class, and one of the boys shouts “make me a sandwich” whilst a female student tries to speak to the teacher. This resonated with me so much. I distinctly remember the idiot boys in my school saying this all the time, even posting it on social media. So, I related to this story right from the start, despite it being on a negative note.

Our main character Vivian reminded me a little of a younger me. She wanted to be individual, she wanted to do what was right and stick up for her fellow female classmates but in the moment, she froze because of what might happen to her if she does. I think a lot of us go through that stage when we’re teenagers, but the more the story progressed the more I loved Viv. She was imperfect, but totally relatable and what matters is that in the end, she stood her ground and kicked some sexist ass with her girlfriends.

I also related to Viv because of her mum too, which might sound a little odd at first. Viv’s mum is actually who inspired her to create Moxie, albeit a younger version of her mum, who was a bit of a punk and riot grrrl. My mum was very similar in terms of the clothing, hair styles and attitudes, so that’s pretty cool – my mum has definitely influenced me too! Also I just have to mention Viv’s cat, Joan Jett. How awesome?

Viv’s friendship group is definitely enviable, and I really appreciated the fact that the characters are diverse, through both their ethnicity and sexuality. They had strong female friendships that felt real, and went through all the ups and downs of high school such as jealousy, new friends, new boyfriends, wanting to fit in to name but a few. We’ve all been there, right?

Throughout the story it becomes clear that the gang don’t discriminate, and there really is a theme of inclusiveness of all girls which I loved. Moxie really captured the typical teenage attitude and school environment (as I see it), and despite the UK/US divide as I’m from England, I definitely related to the situations the girls found themselves in.

There is some romance in the story, but this definitely is not the focus, and through having this relationship some serious points are raised. For example, Matthieu weaves the “not all guys” narrative into the story which I think is very important: maybe not all guys are, but too many are, and this needs to be recognised and tackled. I also appreciated that she also included the point that you can be into relationships and feminism at the same time. *High five*.

The format of the book was also super interesting, as the actual Moxie zines were included. I loved reading these and they definitely added another dimension to the story. I’m actually a little sad that they aren’t real. Someone create these with me?!

Despite some moments that are far too real and relevant, and situations that were infuriating and sometimes difficult to read (not because of Mathieu’s writing, but because of what happened to the girls), Moxie left me feeling uplifted and inspired. I was totally engrossed and found myself cheering along with the girls as it touched on important issues that are too often brushed aside.

Moxie is a kick-ass, powerful, important read and I can’t recommend it enough. I tend to read more fantasy than any other genre but I have no doubt that this is up there with my favourite books of 2017. I really wish this had been around when I was in school navigating my way through similar situations. So much so that I passed it straight to my sister once I finished, and I implore you to get your hands on a copy too, read it and pass it to your mum, sister, daughter, friend, brother, boyfriend – anyone.  I want to be a Moxie girl!