Welcome to the fourth review in my Spooktober Halloween Reads series! The Hazel Wood by Melissa Albert is a highly anticipated book that I’ve been hearing amazing things about all over social media. I was lucky enough to get an ARC at YALC back in July, and though it isn’t actually released until early next year I thought that October is the perfect time of year to read the book and feature it on my blog. I read The Hazel Wood in a matter of days, but I’m still uhming and ahhing over what I actually think. Read on for my spoiler free review. 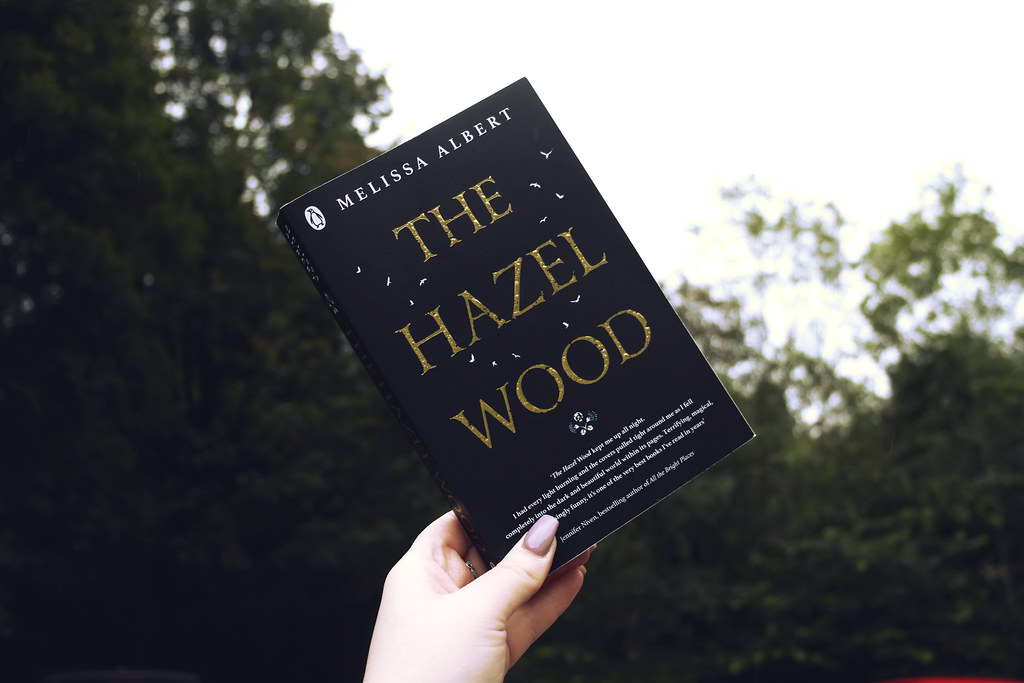 Seventeen-year-old Alice and her mother have spent most of Alice’s life on the road, always a step ahead of the uncanny bad luck biting at their heels. But when Alice’s grandmother, the reclusive author of a cult-classic book of pitch-dark fairy tales, dies alone on her estate, the Hazel Wood, Alice learns how bad her luck can really get: Her mother is stolen away―by a figure who claims to come from the Hinterland, the cruel supernatural world where her grandmother’s stories are set. Alice’s only lead is the message her mother left behind: “Stay away from the Hazel Wood.”

Alice has long steered clear of her grandmother’s cultish fans. But now she has no choice but to ally with classmate Ellery Finch, a Hinterland superfan who may have his own reasons for wanting to help her. To retrieve her mother, Alice must venture first to the Hazel Wood, then into the world where her grandmother’s tales began―and where she might find out how her own story went so wrong.

From the very beginning I had absolutely no idea where this book would take me and that really intrigued me and kept me flipping through the pages.

Alice and her mother, Ella, live in modern day America but due to “bad luck” that follows them around, they are forced to move constantly. I have to say that part of me, even having read the blurb, expected the story to take place in a more fantastical setting from the get go. I admit I’m not always a fan of urban fantasy, but the tense feeling of uneasiness that wormed its way throughout the book from the beginning had me gripped and due to the disturbances that took place I quickly forgot that we were in the real world.

I didn’t feel much of an attachment to any of the characters, however I feel that this could have been a deliberate move by Albert. Although Alice wasn’t your typical fantasy heroine, I still felt invested in her journey and was desperate to know what would happen next to her.

I thoroughly enjoyed the weaving in of fairy tale stories throughout the book and I think these were the chapters that I enjoyed reading the most. The fact that these stories were not just re-tellings of those we are familiar with, but were written just for The Hazel Wood shows Albert’s creativity and ingenuity. The stories were genuinely fear invoking, particularly The Door That Wasn’t There which definitely gave me the creeps.

The whole book felt very dark, atmospheric and magical, filled with plenty of fairy tale tropes that have been turned on their heads. There were many layers to The Hazel Wood and the further the story went on the deeper we delved and the more intense it felt. Towards the end of the story we come across a couple of shocks and twists, and I definitely didn’t anticipate them; Albert keeps you guessing and plotting right until the very end.

While I didn’t exactly love the story (which was disappointing because I’d heard so many great things) I still hold a great appreciation for Melissa’s writing skills; the world building was impeccable and I felt that I could really visualise The Hazel Wood, and there was just something about the way she wrote that held me captivated.

The Hazel Wood is a well paced original and unique book, and is unlike anything I’ve ever read before. So many people have rated this book super highly, while I decided on 3/5 stars. I always feel a little strange, like I might have missed something, when I don’t feel the same way about a book that everyone else seems to have loved, but all books can’t be for everyone I suppose. I think I might revisit The Hazel Wood again in the future, and devote some more time to really get stuck in again, but for now I’m going to leave my thoughts where they are.

Previous Post: « Review: New Fears: An Anthology of Horror Stories Edited by Mark Morris
Next Post: Ten Thoughts Every Book Lover Has in a Book Store »