If you’re into books (which I assume you are considering you’re currently reading a review on a book blog!) then you’ve most likely heard of Mills & Boon. They are the number one romantic fiction publisher after all. A British brand founded in 1908, Mills & Boon books are sold all over the world, with one book selling every 4 seconds! Today I’m bringing some exciting news, as Mills & Boon has undergone a major re-brand for the first time in over ten years, and as part of the re-brand will be launching it’s sexiest series yet, DARE, from the 25th January.

Today I’m bringing you a spoiler free review of the first book in the DARE series, A Week to be Wild by JC Harroway, an extract from the story and a chance to win a copy of the book for yourself so make sure to keep reading (and don’t forget to check out the rest of the tour stops below)! 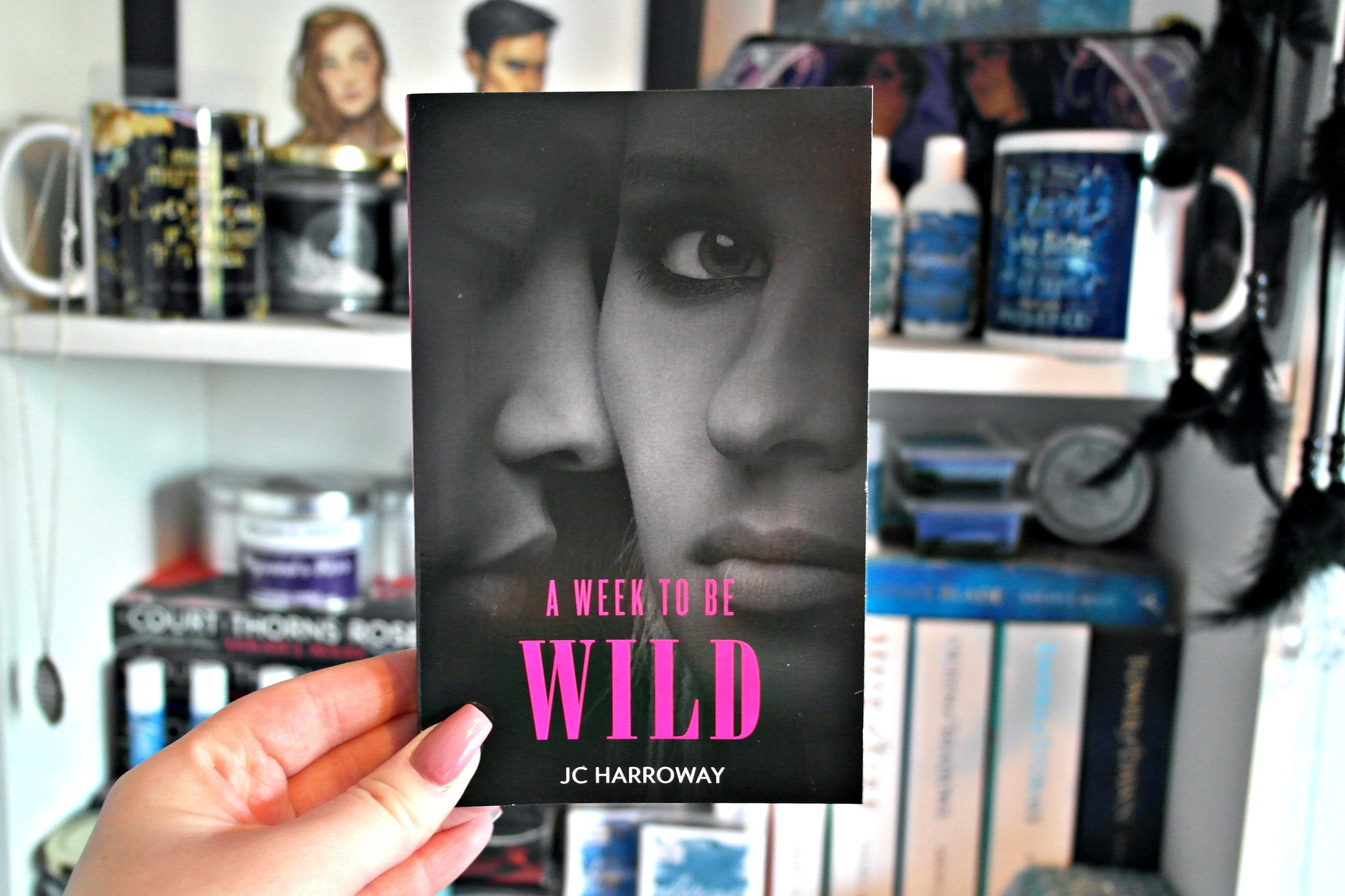 A daring game of temptation

She’ll play his game—but only by her rules!

Alex Lancaster is an adrenaline junkie. He’s also a sexy British billionaire who should come with his own warning signs. When Libby insists she is done with men who live on the edge, Alex coaxes her out of her comfort zone—professionally and very, very personally. Libby’s taking a high-stakes gamble, but the pay-off could win her everything…

So I’m not going to lie, when I first thought of Mills & Boon, memories of the books my mum used to read came to mind, and I associated the brand as something for “older women”. Well, I was wrong. A Week to be Wild is a short adult romance story which I raced through pretty quickly. I expected the adult themes and sexual scenes that were dotted throughout the story, but I was pleasantly surprised at the depths that this story went to.

Harroway covered topics such as grief, death and disability with great care, which made this much more than just a steamy book. The story was also relatively fast paced with enough action to keep me reading and finishing the book in only a couple of sittings. Harroway’s descriptive writing style made the story easy to visualise, particularly the adventurous scenes such as the couple’s trip in a hot air balloon.

The characters were another feature that made me enjoy the story so much. Both our main characters Libby and Alex were well developed and had substance, which is something I think is lacking in a lot of adult romance books. I particularly enjoyed the fact that whist Alex is a confident, attractive and rich businessman, he is also a kind and caring technology geek who still likes to wear his old “t shirt and jeans” ensemble. Similarly, Libby was a smart woman who had worked hard to get to where she was today and knows exactly what she wants.

A Week to be Wild is a strong introduction to the Mills & Boon re-brand, and is so much more than the typical “sexy books” that we have come to know. I’m excited to see where the new series is headed, and definitely think that it’s one to watch in the romance genre!

So, if you want to be in with a chance of winning a copy of this exciting introduction to Mills & Boon’s new series, you just need to do the below:

That’s it! The competition will run for two weeks ending at 11.59pm GMT on February 8th 2018. I will contact the winner once chosen, collect some details and send these to the team at Mills & Boon who will send your book off to you. UK only. Good luck! 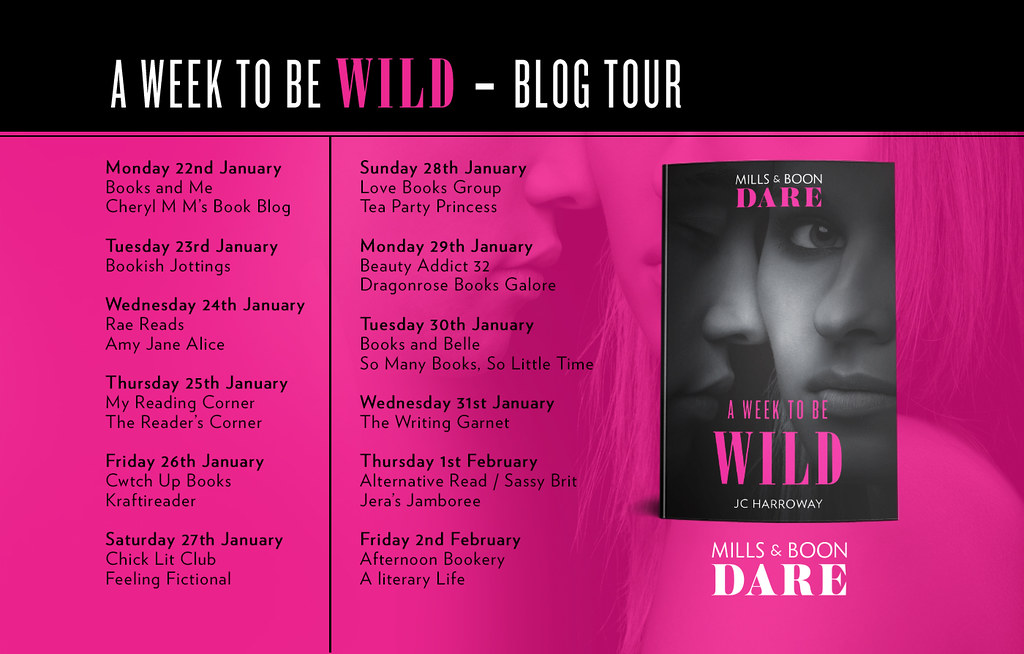 The man occupying her thoughts swept up beside her on a cloud of freshly showered deliciousness, his hand taking a proprietorial hold of the back of her barstool and his smoky, heavy‑lidded smile stripping her naked.

‘Hi.’ Libby closed her slack‑jawed mouth and swivelled to face him, turning her back on the stranger, never one to pass up a golden opportunity. She hated rudeness, but if Beer Breath was too stubborn or thick‑skulled to take the hint…

Alex kept his stare on her, his smile genuine and warm enough to melt her underwear clean off, and then signalled the waiter with a flick of his wrist.

Libby sensed the moment when Beer Breath slinked away, and the hairs on the back of her neck settled—but only temporarily, because Alex hadn’t taken his eyes off her. In fact, he was looking at her as if he was seconds from devouring her whole.

She shivered, delicious tendrils snaking to all her erogenous zones. ‘What are you doing here?’ Libby took a slug of her previously untouched drink, the burn calming her enough to meet his bold stare with one of her own.

‘I came to invite you out for a late supper. I was on my way to Reception and then I spotted you here.’  His hand slid from the back of her stool, and he settled into the one next to her, passing his order to the waiter before returning his disconcerting focus to her.

She stared back, lost for words and missing the proximity of his hand on her chair. He was close enough that his warmth traversed the space between them, but far enough away that she battled her body’s urge to sway closer. And keep on swaying.

‘What?’ One corner of his mouth kicked up. ‘What kind of host would I be if I left you to fend for yourself on your first night in a strange city?’

She couldn’t help the snort that left her. ‘The nonstalker kind…?’

He took the jibe with a cocksure arch of one brow, sipping wine while his poised stare flicked over her face from feature to feature.

Libby flushed hot all over. The ‘stalker’ comment had been beneath her. He hadn’t once touched her, hadn’t bought her drink, hadn’t tried to grab her phone, hadn’t even chased away her unwanted admirer—he had simply given her the out she’d wanted. The rest was all her.

What was wrong with her? Rudeness to a generous host and influential employer? All because he’d awoken needs within her? Needs too long dormant. Needs she’d never had before. Needs threatening to overwhelm her in their intensity.

He dropped the bland smile, and a small frown crinkled the skin between his brows. ‘It’s a public bar, Olivia. I’m being a gentleman. But if you don’t want company, just say so and I’ll leave.’

Of course he would. Alex Lancaster didn’t need to stalk women. They probably lined up, forming a polite, orderly, English queue.

She swallowed, her throat tight. ‘Thank you.’ She tilted her head in the direction of Beer Breath’s exit path. ‘He was about to become a persistent pain in my ass.’

He barely acknowledged the man in the suit, and his continued casual perusal made her limbs jittery and lodged a ball of restless energy low in her belly.

‘So, have you eaten? Dinner?’ One eyebrow lifted and he licked red wine from his plush lower lip.

A simple invitation. One she’d offer herself to a visiting business colleague new in town. Why, then, did it feel like more than an offer of a shared meal? Or was that simply her overactive libido filling in the blanks?

‘I’m not hungry.’ Her voice emerged as barely a croak.

No argument, no persuasion.

‘Tell me…’ He leaned a little closer, his stare a little more penetrating, searching hers. ‘Why the reluctance to work for Able‑Active?’

Alex cut straight to the heart of an issue. She admired that. But no way could she explain her reticence without giving away a whole heap of personal stuff. Stuff she did her best never to think about.

She ducked her head away from his intensity, her sleeveless, lightweight blouse as cloying as a thick, woolly sweater.

He ploughed on. ‘You think I’m arrogant.’

She shot him a glance, surprised to see amusement lingering on his face.

He gave another shrug, as if he had her all worked out. ‘I see it in your eyes.’ He rested his elbows on the bar, leaning closer. ‘I’d like you to extend your stay. All expenses covered, of course.’

‘Why?’ Her head spun, reeling from the arrogant request.

Hadn’t they already established that she wouldn’t roll over and do whatever he asked? If he didn’t seem to have a hotline to her long‑dormant libido she’d laugh in his sinfully handsome face.

‘Able‑Active doesn’t happen inside an office. I want you to experience it, to really understand my vision. I’d like you to stay a fortnight.’

He took another sip of wine, giving her time to respond.

Her jaw fell, her fidgety hand stilling around the stem of her martini glass. ‘Are you nuts?’

Clearly Libby was nuts, too, because for a fleeting moment she considered it. Then she sobered. Even if she wanted to jump when he clicked his fingers, she couldn’t. She had Sonya, her heavily pregnant partner, to consider. Yes, she could work from anywhere in the world with a Wi‑Fi connection for short periods and, yes, she’d cleared her desk before flying to the UK, but a fortnight away from the office…

He laughed—a deep rumble that curled her toes and transformed him from sexy, assured businessman to sexy boy‑next‑door, all grown up. He turned his stool to face her, leaning back in a relaxed slouch, his thighs spread.

Previous Post: « The Wildest Dreams January Unboxing: Into The Jungle
Next Post: The Costa Book of the Year 2017: The Awards Ceremony »