Truly Devious by Maureen Johnson is a book I hadn’t heard about prior to receiving the Harper360 newsletter, but as soon as I read the blurb, I was desperate to read it. I very gratefully received an ARC of the book by the publisher, and couldn’t wait to dive in as soon as I got my hands on it. A murder mystery YA story, who could say no? 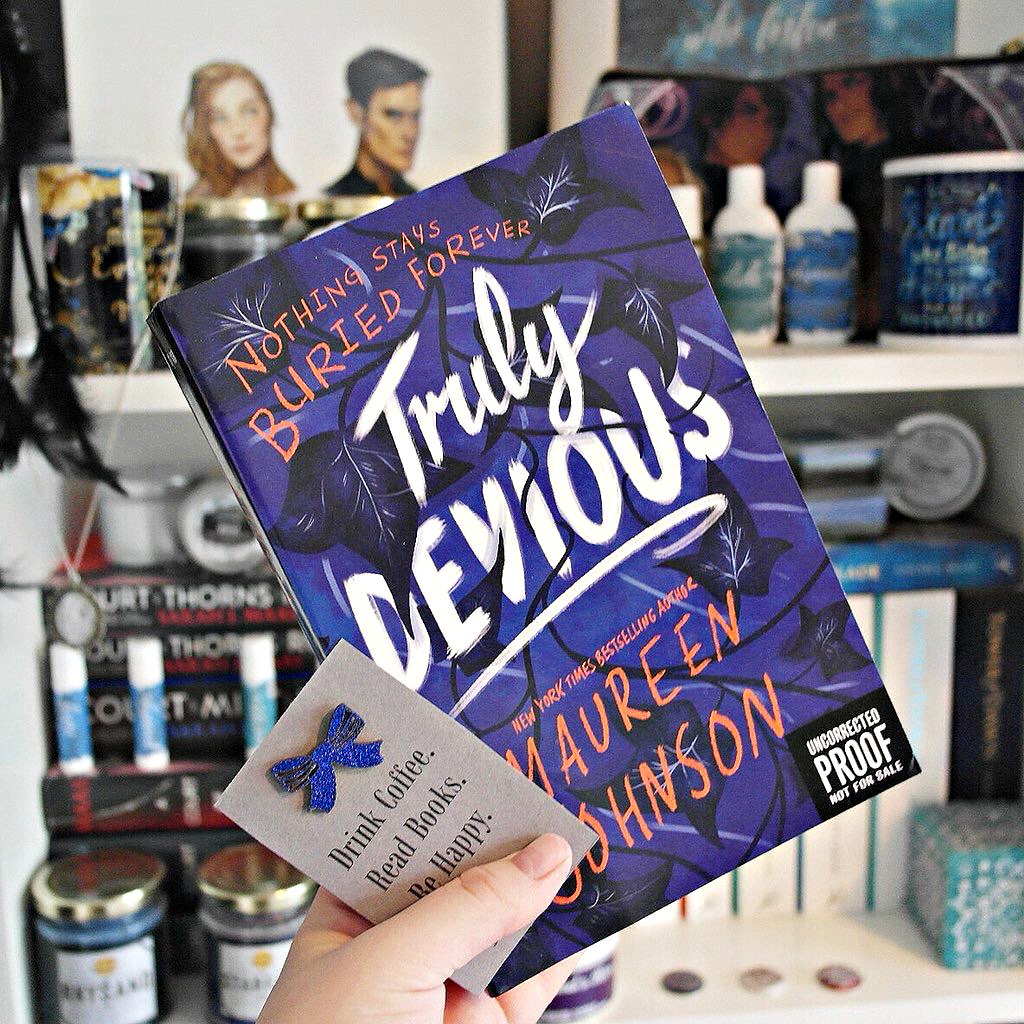 Ellingham Academy is a famous private school in Vermont for the brightest thinkers, inventors, and artists. It was founded by Albert Ellingham, an early twentieth century tycoon, who wanted to make a wonderful place full of riddles, twisting pathways, and gardens. “A place” he said, “where learning is a game.”

Shortly after the school opened, his wife and daughter were kidnapped. The only real clue was a mocking riddle listing methods of murder, signed with the frightening pseudonym, Truly Devious. It became one of the great unsolved crimes of American history.

True-crime aficionado Stevie Bell is set to begin her first year at Ellingham Academy, and she has an ambitious plan: She will solve this cold case. That is, she will solve the case when she gets a grip on her demanding new school life and her housemates: the inventor, the novelist, the actor, the artist, and the jokester. But something strange is happening. Truly Devious makes a surprise return, and death revisits Ellingham Academy. The past has crawled out of its grave. Someone has gotten away with murder.

The first thing I want to make note of is that Truly Devious is packed with a diverse cast of characters, with varying ethnicity, sexual orientations and abilities both physical and in terms of mental health – I loved this! Our main character Stevie is independent, brave and kick ass but also suffered from an anxiety disorder. The author goes into detail of the panic attacks that Stevie has with discussions of the medication that she is on which could be triggering to some. The female characters have passions and hobbies that have typically been seen as “masculine” such as engineering which I think is so important.

I also really loved Nate, Stevie’s friend and housemate, and his sassy comments. I found it really heartwarming how he went outside of his comfort zone to help his friends, such as attending a ball with Stevie because he was trying to cheer her up despite him hating the idea of it. They were an unlikely pair but really great friends. The rest of the gang were likeable but not outstanding like the above pair, aside from the bad guys of course, and whilst there is romance in the story it definitely did not overshadow the plot and is not the main focus.

It did take me a little while to get into the book to begin with and I found the timeline to be slightly confusing at first, but once I got stuck in? I devoured the rest in a matter of days.

Ellingham Academy is for the gifted, but I truly appreciated that a whole host of talents and gifts are appreciated, not just the more “academic” notions. Between all the mystery and exceptionally talented individuals, there was still regular teen drama such as relationship trouble and arguments. It was also interesting to read about another version of student life; while alcohol and partying was included, it wasn’t your typical college read. I was also glad to read a strict and frank discussion about consent between the staff and students.

As for the mystery itself? Mauren Johnson wove together an intricate and well designed plot which was not only gripping, tense and filled with a narrative that I just couldn’t solve, but also funny and relatable many times too. The story was cleverly executed and I loved getting to see how Stevie’s brain worked and deduced things. The trips back in time to the initial murder were interesting and added another dimension to the story.

The last 200 pages or so were utterly compelling and that ending… like WHAT?! I need the next book now! Total cliffhanger. I finished the story on my lunch break at work, closed the book in shock and immediately told my colleagues about it. Whilst not my usual fantastical read, Truly Devious was without a doubt 4/5 stars for me. Truly terrifying and often creepy, I was immersed into a plot full of twists and turns that kept me guessing and calculating, but I never got the answer quite right. Truly Devious is released today so make sure you grab a copy here!