A few months back I very gratefully received a copy of The Wanderers by Kate Ormand. I follow Kate on social media and have chatted with her a couple of times, so I was super excited to read her novel! Over the past year or so I’ve been loving Circus stories, first with Caraval and then The Greatest Showman (anybody else still obsessed with the soundtrack?), but I hadn’t read or seen anything like this before with shifters, so I couldn’t wait to get stuck in. Keep on reading for my spoiler free review! 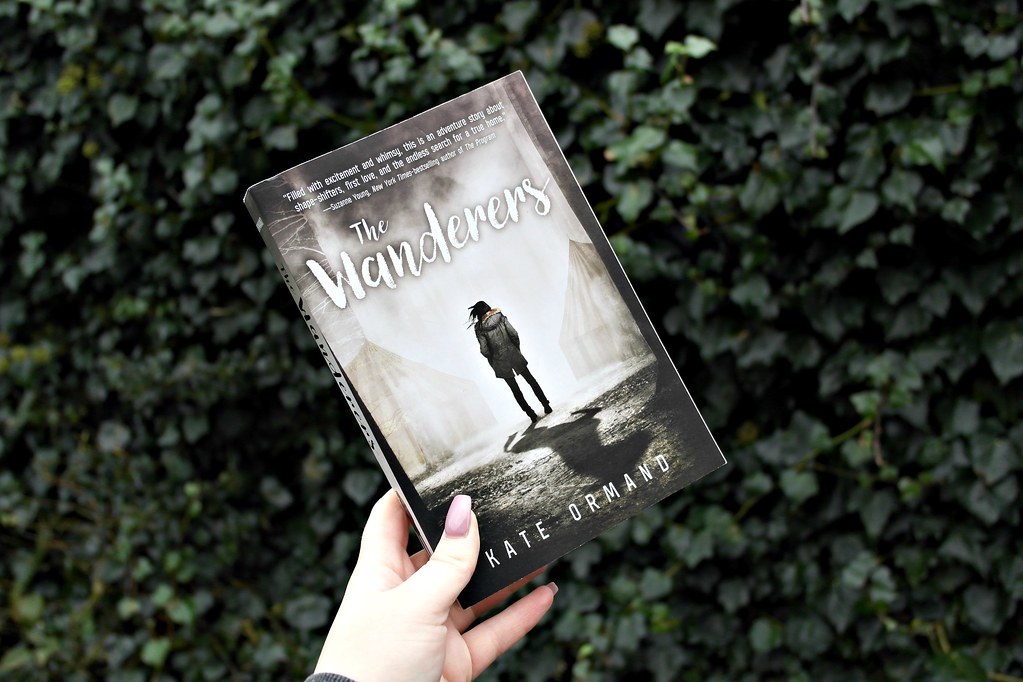 Flo lives an eccentric life—she travels with a popular circus in which the main acts star orphaned children with secret shape-shifting abilities. Once Flo turns sixteen, she must perform, but she’s not ready. While practicing jumping a flaming hurdle in a clearing beside the circus, she spots a dark figure in the trees and fears he saw her shift. The news sends the circus into a panic.

In Flo’s world, shifters are unknown to humans with the exception of a secret organization—the EOS, referred to as “hunters.” Hunters capture and kill. They send some shifters to labs for observation and testing—testing they don’t often survive—and deem others useless, a danger to society, and eliminate them. To avoid discovery, shifters travel in packs, constantly moving and keeping themselves hidden. Up until now, the circus was the perfect disguise.

Believing she has brought attention to the group, Flo feels dread and anxiety, causing her to make a mistake during her performance in front of the audience—a mistake that triggers a violent attack from the hunters.

Flo manages to flee the torched circus grounds with Jett, the bear shifter who loves her; the annoying elephant triplets; and a bratty tiger named Pru. Together they begin a new journey, alone in a world they don’t understand and don’t know how to navigate. On the run, they unravel secrets and lies that surround the circus and their lives—secrets and lies that all point to the unthinkable: Have they been betrayed by the people they trusted most?

The Wanderers was a quick and fast paced read, and although it doesn’t cover a long period of time, there’s still plenty of action to propel the story forwards. There may have been a limited number of locations throughout the story but Ormand’s talent for descriptive writing made each scene and character so easy to visualise, making the story seem much bigger and play out like a film in my head.

Whilst this might technically be a YA read, there is a lot of violence through the hard hitting plot with a high death count. As the story is told from Flo’s perspective, her feelings are almost tangible; the bleak desolation of the story practically pours off the page and I believe the world “atmospherical” sums up the writing in this story.

One of the things I loved most about The Wanderers is that there is a heap of character development throughout. Flo begins as quite a meek and mild character who goes from strength to strength despite being hit with awful situations one after another. Faced with some tough decisions, Flo had to grow up in a matter of days and I think this was really well handled by Ormand.

I also really loved Jett, who is also a bear which I think is pretty cool! Whilst at times I did feel he was a little too overprotective of Flo, he was lovely and caring, and definitely somebody you would want in your life even as just a friend. I particularly liked that he didn’t need to go around proving his masculinity, place in the troop or his relationship with Flo, these were essentially shown through his actions which I appreciated.

These two characters were the most stand out for me, though I definitely did like the dynamic amongst the group and the diversity that was shown, through there being people of different nationalities, sexuality, and even abilities with one member of the circus being a “half shifter”.

There is an undercurrent of romance in the story but I feel that it was just the right amount – it didn’t overshadow the main plot but definitely drove it forward at times. It was slow burning and innocent but it was clear to see how much the pair loved each other and you could definitely feel the passion

The Wanderers featured a unique and exciting concept that kept me gripped throughout. I couldn’t guess where the story was going to go and there were definitely a couple of shocks and plot twists that I never anticipated! I found myself picking this book up at any free moment I had, even on my lunch breaks at work, which is always a good sign in my opinion.

I’m excited to see where the story is headed, particularly as the sequel The Pack is out now! The world appears to be getting much more vast with the characters getting older and more experienced which I think will make for an even more gripping follow up. Thank you so much to Kate for sending me a copy of The Wanderers in exchange for this review – I had a lot of fun reading it!