This morning I finished Estelle Maskame’s latest novel, and since closing the book I haven’t been able to stop thinking about it. I read and loved Maskame’s bestselling first series, Did I Mention I Love you (or DIMILY for short), a year or so ago, and when I heard that she was writing the first book from Tyler’s point of view I couldn’t wait to read it. So when I received an email from Ink Road Books asking if I wanted to be part of the book tour, of course I had to say yes – my copy is even signed!

Just Don’t Mention It is the story of Tyler, with chapters alternating between his heart breaking past and turbulent present. You don’t have to have read the initial series to understand this, but I found it cool to draw comparisons and read about things that I remember Eden discussing the first time around. Keep on reading for my spoiler free review. 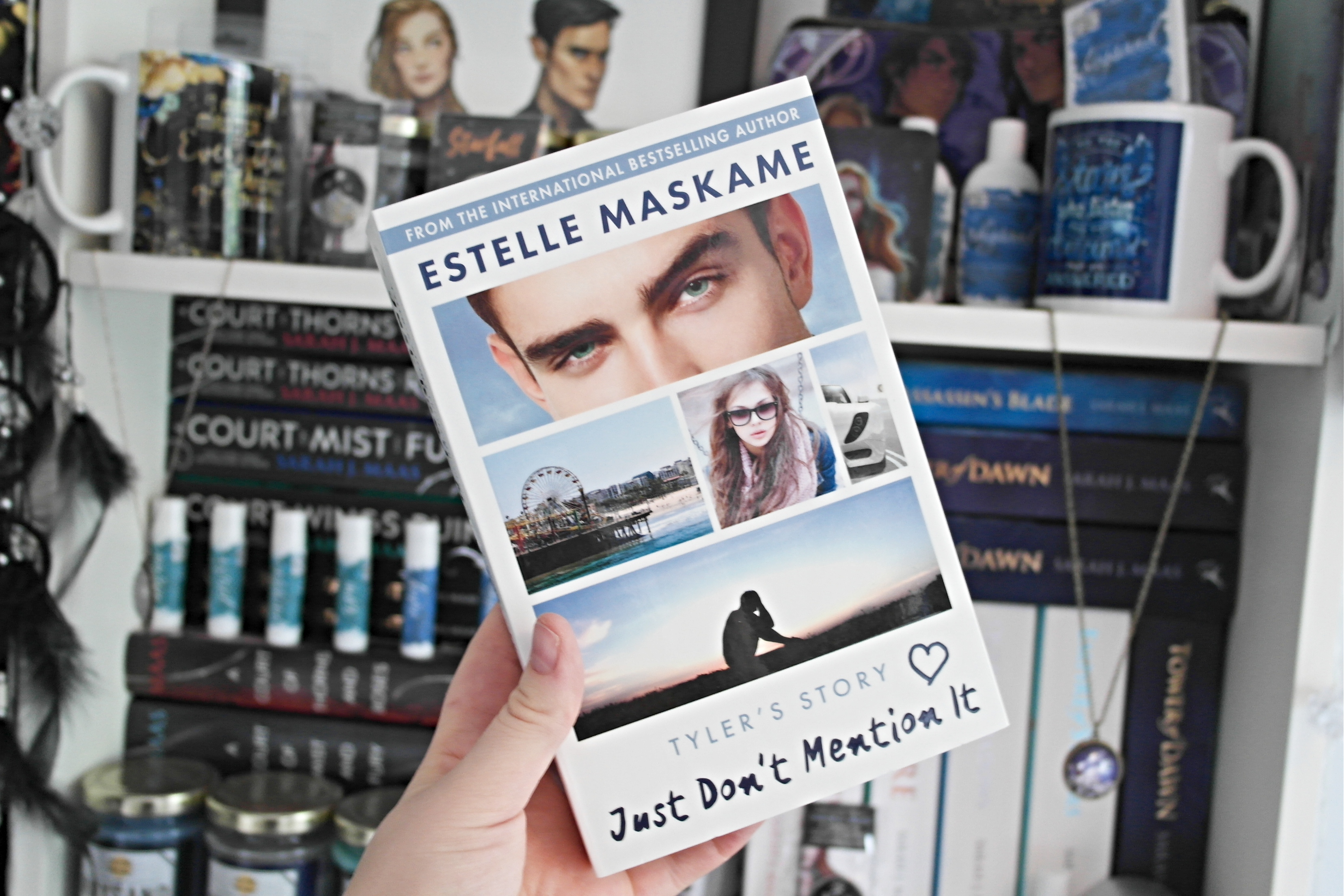 Tyler Bruce – hell raiser and bad boy – tells his story in his own words.

Alternating between past and present, Just Don’t Mention It is narrated from Tyler’s perspective. We see his life as a twelve-year-old boy suffering physical abuse at the hands of his dad. We see him as the daredevil seventeen-year-old we first met in Did I Mention I Love You?, the stepbrother who falls head over heels for Eden.

In these parallel timelines we finally understand the enigmatic Tyler’s complex story and his innermost thoughts – on his dad, his mom, on Tiffani and Eden – all the things Eden wasn’t witness to. And, crucially, the reader gains heartbreaking insight into why Tyler becomes the self-obsessed, angry and unhappy guy we encounter in DIMILY.

So I want to start this review with a trigger warning for child abuse, domestic abuse and drug abuse.

Within reading the first chapter I was hooked; it was powerful, gripping but so emotional. With alternating chapters five years apart, we read from Tyler’s 12 year old point of view and the present day as a 17 year old. The flashback chapters are definitely hard to read, as we learn about Tyler’s extremely difficult and heart-wrenching ordeal of living with a violent father who abuses him on what becomes a daily basis, unbeknown to the rest of his family.

As the chapters progressed, the content became more and more intense and at times were hard to read, but Maskame handled these scenes with such care and her talent for writing really shone through.

Reading chapters from Tyler’s past really delivered an insight into why his behaviour is as it is, and being able to understand his thought processes and the internal battles he encounters every day as a 17 year old struggling to be the person he wants to be was not only interesting but again, so sad. In my first read of DIMILY, from Eden’s point of view, at times I must admit that I was frustrated with Tyler. Why would he say that? Why would he do that? Well, now we know and I feel for him so much.

Having turned to alcohol, drugs and “bad boy” behaviour, Tyler is perceived a certain way and it honestly breaks my heart that since he was 12 years old he felt he had to act like the Tyler everyone expected, not the one he wanted to be. But… then there’s Eden.

Watching their relationship develop, I jumped right on board the “ship” train. The relationship between the two blossoms, albeit from a bit of a rocky start, quite slowly and it becomes clear how good the pair are for one another. Tyler feels he can be himself for the first time in a long time, and whilst Eden tries to stop him making potentially dangerous decisions, she doesn’t stop him from being him which I think is so important, especially after everything he has been through. While there are difficult to read parts, Just Don’t Mention It is also full of smiles, laughter and butterflies-in-the-belly moments.

The characters were so well developed I felt as though I could really see them in my mind, particularly Eden and Tyler. Similarly, Maskame’s world building was second to none, with each scene so easy to visualise I felt as though I was running and touching the Hollywood sign myself. I wasn’t joking when I said I couldn’t stop thinking about this book; it’s over 12 hours since I put it down and I keep playing scenes over and over in my head.

I can’t say too much for fear of spoiling the book, but while there are dark and deep parts, Just Don’t Mention It is also a beautiful and romantic story about first real love and helping somebody get back to the person they want to be. I highly recommend that you pick up a copy, and also delve into the well loved DIMILY series – it’s a bestseller for a reason! It’s also one of a select few YA books with a male protagonist and I am so down to read more of them. I’m also convinced that Maskame will now be an auto-buy author for me.

Just Don’t Mention It was an obvious 4/5 stars for me; I raced through it and was hooked throughout. Huge thanks to Ink Road Books for inviting me to part of the blog tour, and make sure you check out the rest of the reviews below.

Check out my review of Dare to Fall, Maskame’s previous standalone story, which was also amazing!