A few weeks back I received the always exciting newsletter from the lovely people at Harper360 who offered to send me an advanced copy of Onyx and Ivory by Mindee Arnett to review. I’d heard lots of great things surrounding the book so I of course had to say yes and I couldn’t wait to dive right in. Keep on reading for my spoiler free review! 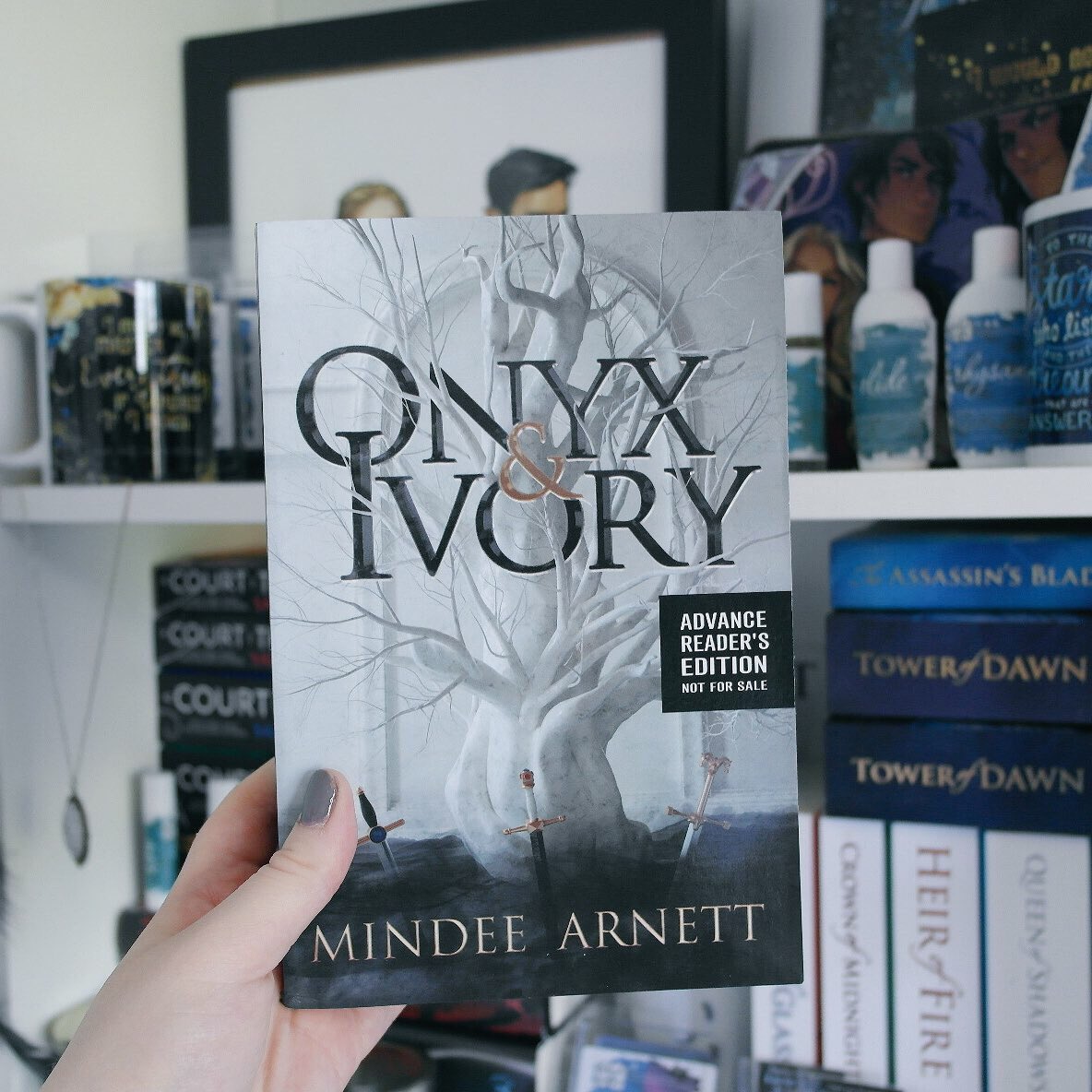 Traitor Kate lives as an outcast after her father’s act of treason years before. Working as a member of the Relay, the imperial courier service, Kate is all too familiar with the nightdrakes – flightless dragons that come out when dark falls to hunt. But Kate is keeping a secret: she is a wilder, a person born with magic that allows them to influence the minds of animals. It’s a power punishable by death in the kingdom of Rime, but it’s this power that leads here to a caravan massacred by nightdrakes in broad daylight. The only survivor is her childhood friend and first love, Prince Corwin Tormane.

Prince Corwin is the second son and has always known his brother would assume the throne, even with the upcoming uror – the ritual to decide the King’s successor. Corwin has accepted that, preferring to spend his days away from the palace and the King, with his sickness inflicted upon him after the attempt on his life, and so decides to investigate the unrest in the cities and the daydrakes. Only he is attacked, and saved by Kate.

As their paths cross once more, Kate and Corwin must put their past behind them to save the people from the daydrakes and the darker threat stirring in the Kingdom, which may thrust them into a civil war and force Kate to reveal her secret.

The thing I enjoyed the most about Onyx and Ivory definitely has to be the characters. When done well, I really enjoy multiple perspectives and luckily Arnett definitely succeeded! With the chapters alternating perspectives between Kate and Corwin we got to see development from both sides and this really added depth to the story. And even though the two of them definitely have some history, I can’t help but enjoy the hate-to-love trope so I was ready for this.

From the beginning I really liked Kate. She was strong, smart and even with her powers she seemed “normal”. Like somebody you could be friends with in real life, you know? Similarly, even though through Kate’s eyes we didn’t get the best first impression of Prince Corwin, within a few chapters I loved his character. And he has a sense of humour which is always appreciated! Something else to note is that while Corwin knew he had responsibilities, he didn’t compromise on his values and beliefs. He cares and stands up for what he believes in, which we see when he argues against his advisors in meetings and even his brother, who are all telling him to do the opposite. Trials and challenges are always exciting to read about, and so the uror was really interesting and included challenges that were not linked to the typical trope such as “make your way through these woods to find this certain object through dangerous terrain wearing a blindfold!” for example.

While our main characters were well fleshed out and likeable, I have to mention the supporting characters too. Throughout Onyx and Ivory there is such good representation of friendship that made me so happy. First up we have Dal, the seventh son in another city who while during his travels became friends with Corwin. It’s such a wholesome friendship, empty of any testosterone fuelled competition and full of love and care. Similarly, Kate and Bonner, a long time friend and fellow wilder, are just so cute and I want to be part of their gang!

Special mention to Kate’s roommate and good friend Signe too! Living in a world where it appears that men and held higher than women (what’s new?), Signe totally disregarded the restrictions put in place by men and the establishment. For example where she should and shouldn’t be, what she should and shouldn’t do and giving Kate a moonbelt which is only intended for married women. Yes girl! I also loved the budding relationship between Dal and Signe. He respects her individuality and independence, enjoys her storytelling and personality and never tries to belittle or stop her.

Although Onyx and Ivory is packed with impressive world building, with scenes and surroundings easy to visualise, I would have a liked to learn a little more about the Kingdom and it’s history, even it’s people, without so much info dumping as such. While a lot did happen throughout the course of 500+ pages, it did feel rather slow paced. Not boring, just as though there was a lot of development, both character and story-wise which gave us a real insight into our main characters.

I enjoyed the fact that I couldn’t guess who the “bad guy” was and I actually really liked the direction the story took in terms of the threat, which made my experience reading Onyx and Ivory so much better. Even though this book is fantastical, there was also a realistic feeling which made it all the more sinister and I’m intrigued as to how this will play out.

The theme of rebellion and uprising is always exciting to read about, and while I would have appreciated a stronger ending as it did feel a little rushed after a lot of development, I do get the sense of a huge fantastical world which provides a lot of scope for future books and that change is abreast for the Kingdom. I really do anticipate the next book being even better than the first!

Huge thanks to Harper360 for sending me a copy of Onyx and Ivory by Mindee Arnett and I’m really looking forward to the second instalment. I’ve already seen Arnett say that she really puts the characters through “the ringer” so I’m interested to see which direction the story takes!

* Book depository links used. If you purchase through this link I earn a small commission!