Back at YALC in July (which you can read about here if you’d like to) I just knew I had to get my hands on Lauren James’ latest story, The Loneliest Girl in the Universe. I was glued to the Walker YA Twitter feed, and after endless scrolling and a visit to their stand, I found out that the pop up Waterstones store was selling limited early release copies. You better believe I half ran/walked my way to the stand! I was so lucky to be able to get my hands on a copy, and even luckier to bump into Lauren on one of the days she wasn’t scheduled to attend and get my copy signed. It turned out that my copy would be first ever signed final copy of the book. How exciting! 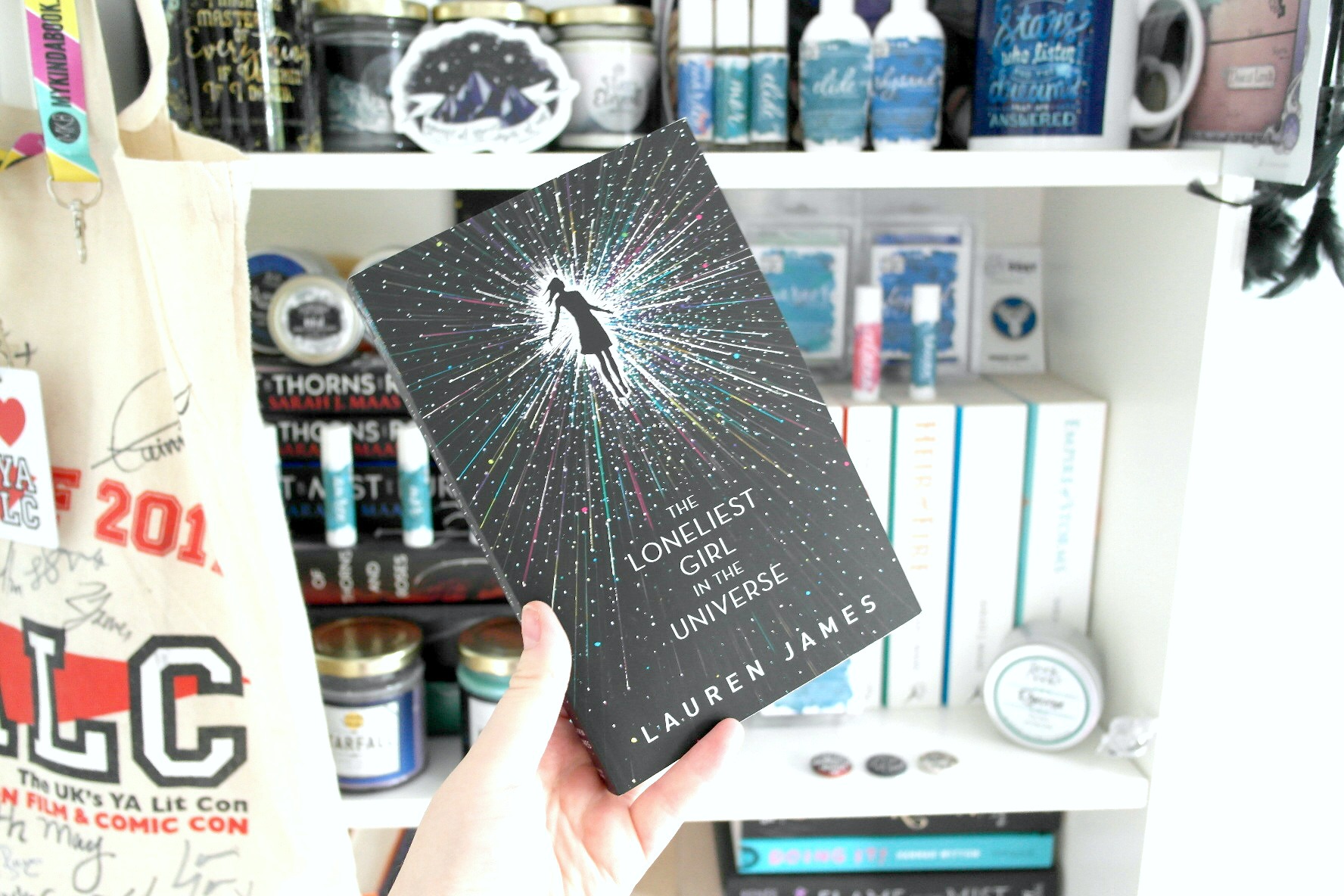 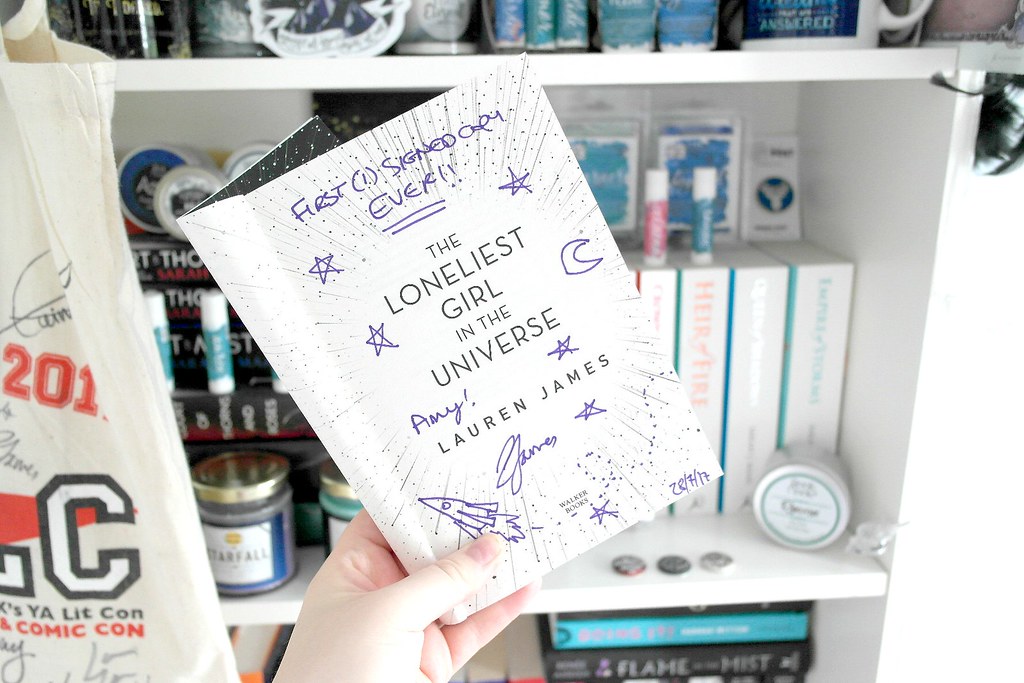 Can you fall in love with someone you’ve never met, never even spoken to – someone who is light years away?

Romy Silvers is the only surviving crew-member of a spaceship travelling to a new planet, on a mission to establish a second home for humanity amongst the stars. Alone in space, she is the loneliest girl in the universe until she hears about a new ship which has launched from Earth – with a single passenger on board. A boy called J.

Their only communication with each other is via email – and due to the distance between them, their messages take months to transmit across space. And yet Romy finds herself falling in love.

But what does Romy really know about J? And what do the mysterious messages which have started arriving from Earth really mean?

Sometimes, there’s something worse than being alone . . .

First off, please do not be fooled into thinking this is an epic space romance. The Loneliest Girl in the Universe is a tense, gripping tale about love, loss and trust with a whole heap of thrill weaved in and is truly terrifying but seriously magnificent.

The book begins with a news article which explains the background of the story and all about The Infinity, the first ever manned space-craft on a voyage to find another planet which is habitable for humans – this is also the setting of our story. I really enjoyed this introduction, as it provided lots of information in a format that isn’t very ‘info-dumpy’ as such. Lauren manages to paint such a vivid picture of the space ship and the story through her superb writing skills, meaning that the world building is second to none.

The story is written in first person through diary entries, the first segment being “X days since The Infinity left Earth” which again is a really interesting format. Each chapter is fairly short, which really aided the pace at which I read the book and also helped to create tension. I couldn’t stop flipping the pages! The main character is super into a TV show which she writes her own fan fiction of, and we got to read snippets of this between every few chapters, kind of like a comic relief to ease the tension I would say, but also really enjoyable to read.

Our main character is Romy Silvers, the first person to ever have been born in space, who is travelling in The Infinity alone. I found myself able to relate to Romy quite well; I could feel and understand her emotions and thought processes right along with her. On the first page alone Romy is reading fan fiction in her pjs, so I knew from the beginning we would get on! Romy also struggles with anxiety. As someone who has been through this too, it’s always refreshing to read about a main character who is going through similar situations to yourself. Throughout the story my respect for Romy definitely increased. She was strong and brave despite the shitty hand she had been dealt and while she did have her moments where things got too much (but hey, we all do, we’re only human) she picked herself up, dusted herself off and got on with it. I’m not sure I would be able to manage that so huge props to Romy.

While there are a couple more characters in the story, we don’t hear much from them until towards the end and I’m definitely not saying any more because you know, spoilers.

The more that the story progressed, the more uneasy I felt. It began with little things, such as the fact that whilst Romy can communicate with Earth, it can take literally years for the messages to reach her. The idea of being totally isolated and alone is terrifying in itself. I don’t want to spoil anything so I won’t say much, but as the blurb states, Romy begins emailing back and forth with another passenger of a ship on the same voyage. At first, everything seems great and I was excited that Romy had someone to talk to, but the chapters grew more and more tense and I began to feel like I couldn’t trust any of the characters. I knew something wasn’t quite right, but I couldn’t put my finger on it.

The last several chapters of The Loneliest Girl in the Universe had me utterly enthralled. Lauren James threw in plot twist after plot twist and I definitely didn’t see the ending coming; I was genuinely shocked and seriously impressed. One on hand things seemed to go from 0 to 100 in about five pages, but through Lauren’s ingenious writing, I realised that the whole story had been building to this and it was very cleverly executed.

The Loneliest Girl in the Universe is undoubtedly 4.5/5 stars for me, I couldn’t put the book down and read it in a matter of hours one lazy weekend morning. I hope that my review does the book justice; I didn’t want to say too much for fear of ruining it as I think it’s best to go into the book without knowing a lot so that you can be blown away. Lauren’s latest story is released today, so go get your hands on it! Promise you won’t be disappointed.